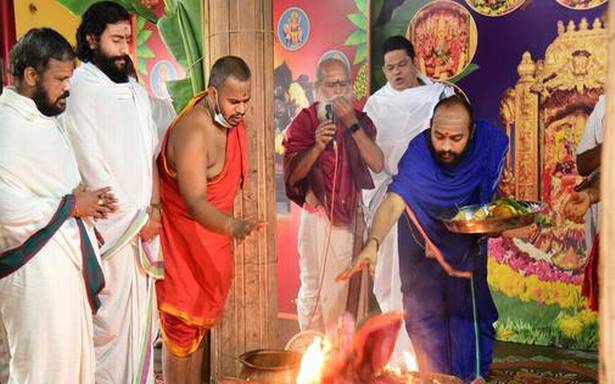 Amidst chanting of Vedic hymns, the temple priests offered a silk sari, sandalwood pieces, ghee, flowers and fruits to the ‘homam’, and aaseerwachanam (blessings) were given to devotees.

Thousands of Bhavani devotees, after taking a holy dip in the Krishna, made a beeline for the Kanaka Durga temple from midnight and offered special pujas to the Goddess to mark the conclusion of the deeksha.

A huge ‘homagundam’ constructed on Arjuna Veedhi was used by devotees to deposit their ‘Irumudi’ that they had carried on their head, walking all the way from their homes or chosen destinations. The vicinity of Indrakeeladri reverberated with chants, bhajans and slogans – ‘Bhavani Mata ki jai’, ‘Jai Bhavani Jai Jai Bhavani’ – as Bhavanis thronged the shrine to relinquish their deeksha.

Circumambulation of the Indrakeeladri (Giri pradakshina) is mandatory for those who take the deeksha.

About 4.50 lakh devotees thronged the temple this year to relinquish their deeksha. The total turnout is expected to touch 5 lakh by the end of the season.

Though the relinquishment concludes with poornahuti, a spillover of devotees will remain on Thursday. The devotees generally do not prefer to relinquish deeksha on Tuesdays and Fridays. So, there is a possibility that Bhavani devotees are likely to come on Saturday as well. The temple authorities are expecting the rush to continue and are making arrangements accordingly.