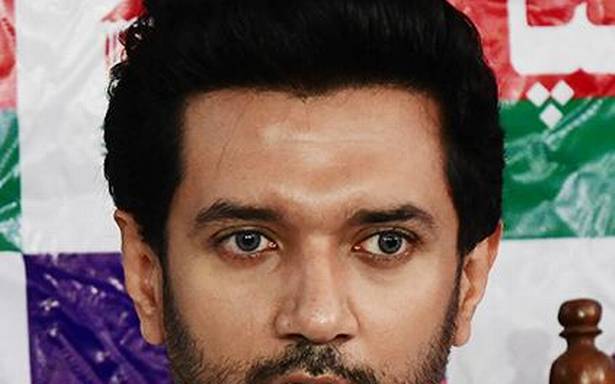 A day after the internal coup in the Lok Janshakti Party (LJP), an intense ownership battle emerged between the two factions, one headed by Chirag Paswan and the other by his uncle Pashupati Nath Paras, who led the rebellion.

A notice released by the Paswan faction claimed that at 4 p.m. on Tuesday, a national executive meeting was called by the party, in which all the five MPs, Mr. Paras and Mr. Paswan’s cousin Prince Raj were removed from the primary membership of the party. The notice is signed by the secretary general of the LJP, Abdul Khaliq.

While the other faction claimed that they, too, had called a national executive meeting and decided to appoint Suraj Bhan, elder brother of party MP Chandan Singh and a close associate of the late Ramvilas Paswan as working president.

Both factions have also simultaneously shot off letters to the Election Commission of India.

“According to the party’s constitution, only the president and the secretary general have the right to call for the party’s national executive to meet. And the national executive not only has MPs and MLAs but also the secretary general, treasurer, 16 general secretaries, 16 national secretaries, and nearly 15 presidents of frontal organisations and presidents of State units,” Mr. Khaliq told The Hindu.

The Paswan faction has also written to Lok Sabha Speaker Om Birla to recant the appointment of Mr. Paras as the Parliamentary party leader of the LJP, claiming that only the chairperson of party’s Parliamentary board had the right to nominate the leader according to its constitution.

Mr. Paras’s faction, meanwhile, is confident that it will be able to win the legal battle. “Our letter to the Election Commission on the appointment of Mr. Suraj Bhan as working president precedes their notice on removing all of us,” Khagaria MP Mehboob Ali Kaiser said.

The question of ownership of the party, though, will be settled only by the Election Commission.

The Paras faction is confident that it will win the political battle. “Mr. Paras was the face of the party in Bihar, Ramvilas-ji depended highly on him. The decision to replace him with Prince Raj as the Bihar president was self-defeating. And even Prince Raj was not allowed to function independently. The candidates for the Bihar Assembly elections were decided without consulting him,” Mr. Kaiser added.

According to sources, after this shocker, Mr. Paswan is planning to move full-time to Patna instead of remotely handling the party from Delhi.

Also Read | LJP row: As you sow, so shall you reap, says JD(U) chief

Meanwhile, he broke his silence over the events. Posting on Twitter a letter he wrote in March 2021 to his uncle Mr. Paras, Mr. Paswan said that he had made every attempt to keep the party together.

The letter details the attempts Mr. Paswan claims he made to reach out to his uncle, and the breakdown in communication. Mr. Paswan in the letter claimed that the relationship turned sour after Mr. Paras was replaced by Prince Raj as the Bihar State unit President. Mr. Raj was appointed Bihar state chief soon after the death of his father Ramchandra Paswan, the younger brother of both the late Ramvilas Paswan and Mr. Paras.

The relationship further soured when Mr. Paswan was appointed the party president in November 2019. Mr. Paswan claimed that since he had taken over the party, Mr. Paras’ visits to his own brother Ramvilas Paswan became far and few.