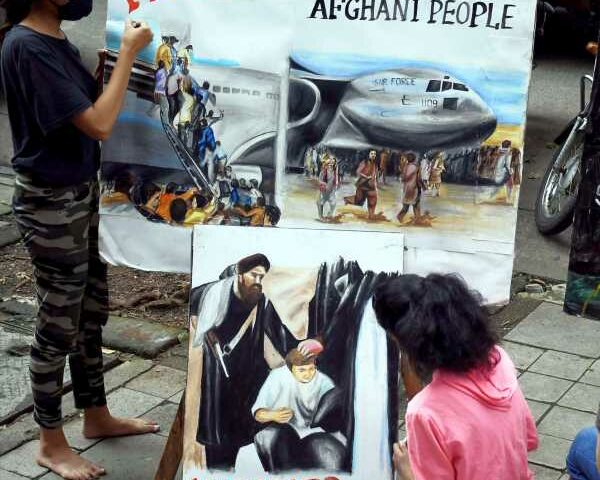 ‘Today with Taliban at our doorsteps literally, we can’t even put up our national flag. Only Allah knows, what will happen to Afghanistan now’

Cooped up inside his Kabul home with his family since the Taliban took over the capital city, Akhtarabir Akhtar, who eagerly waits to celebrate August 19 to mark the Independence Day of his beloved Afghanistan, says instead of festivities, fear and an uneasy calm rule the streets.

Akhtar, a former journalist, is not a stranger to the fear of being targeted, but the chain of events in the past few days has given him sleepless nights.

“August 19 is our Independence Day and we celebrate this occasion every year with feast and much gaiety. People decorate their homes and plant country flags, make merry, go to decked-up bazaars, wear colourful national clothes and do the national dance ‘Attan’. All of that is missing today,” the 54-year-old told PTI over phone from Kabul.

While phone lines and internet are working in Afghanistan, the network connection is wobbly and his voice sometimes quivered as he bared his sentiments on the situation in his homeland.

“Afghans celebrate August 19, but the government has fallen, what to talk of freedom. People are locked up inside their homes from Kabul to Kandahar and are afraid to step out as the Taliban men are marching in the streets. We all feel like prisoners on our anniversary day of ‘azadi’,” he said.

Prices of food and other commodities have “shot up as borders are practically sealed”, he said.

Akhtar, who works as a government official, lives in Kabul with his wife and two daughters aged 27 and 18, while his elder son works in Germany and the younger one is studying at a university in Beijing.

“My wife is a midwife at a private hospital. She is scared to go to work now. My elder daughter who worked in a bank earlier is feeling uncertain and my younger daughter who was dreaming of going to a college and pursue higher studies, is now wondering if she will be even allowed to study by the Taliban and live freely,” he rued.

A despondent Akhtar, who has not gone to office since the Taliban intensified its offensive early this month, lamented that “Afganistan has descended into an abyss of uncertainty”.

“No one wants to live here anymore as they fear for their lives. Some of my relatives and friends had also rushed to the Kabul airport to seek a flight out of the capital city the day it had fallen to the Taliban, but they couldn’t escape, so returned to their homes,” he said.

The story of the Akhtar family finds echoes in tens of thousands of households across Afghanistan, which had achieved Independence way back in 1919, overthrowing the British colonial yoke, with Amanullah Khan being its first sovereign ruler, a revered figure among the Afghans.

However, the civil wars in later decades had fractured the peaceful and progressive atmosphere that once existed in Afghanistan.

The Taliban swept across the country this month, seizing control of almost all key towns and cities in the backdrop of withdrawal of the US forces that began on May 1.

The insurgent forces has now sought to portray themselves as more moderate than when they had imposed a brutal rule in the late 1990s. But many Afghans remain sceptical of this and fear return of “regressive” regime.

Akhtar says he loves Afghanistan and is emotionally attached to his motherland, but given the current situation, if an opportunity comes up, “I will move out of country with my family, preferably to India, which is like my second home”.

The former journalist from Kabul, recalled his visit to India in 2011-12 when had come to Delhi for a mid-career course and become an admirer of India and its culture.

“I have fond memories of my India visit and besides academics, we had also gone to see the Taj Mahal and other places. The food and the culture of India are very colourful like we have in Afghanistan. We are good friends and it breaks my heart that Kabul had fallen to Taliban on August 15, the day India marked its 75th Independence Day,” Akhtar said, with a tone of sadness in his voice.

He recalled his visit 10 years ago to south Delhi’s Lajpat Nagar — dubbed as ‘Little Kabul’ — and how he felt it was “piece of Afghanistan in India”.

“India and its culture and cinema always attracted me. Even I have seen the Hindi film ‘Kabuliwala’. It was such a beautiful coincidence that both countries achieved liberation in the month of August, Afghanistan in 1919 and India in 1947,” the Kabul resident said.

In August 2019, a suicide bomb attack in Kabul had delayed the centenary Independence Day celebrations in Afghanistan and its at embassies in Delhi and elsewhere.

“Today with Taliban at our doorsteps literally, we can’t even put up our national flag. Only Allah knows, what will happen to Afghanistan now,” he lamented.