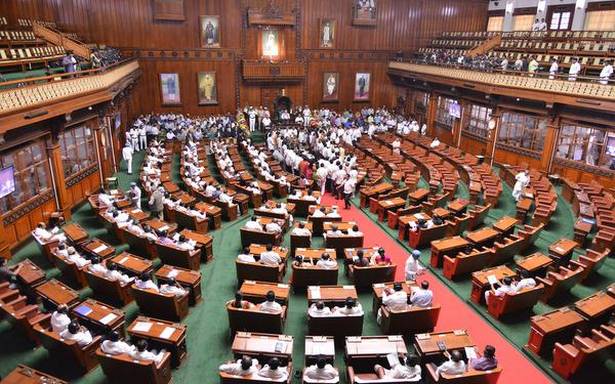 The State Cabinet has decided to hold the session of the Karnataka State Legislature from September 13 to 24 in Bengaluru.

As the State legislature has to meet the six-month constitutional requirement, both houses of the legislature would hold the session from September 13, Minister for Law and Parliamentary Affairs J.C. Madhuswamy told mediapersons after the Cabinet meeting in Bengaluru on August 19.

Article 174 of the Constitution stipulates that ‘six months shall not intervene between its last sitting in one session and the date appointment for its first sitting in the next session’.

The principal Opposition Congress has been demanding a session of the State legislature to discuss issues related to handling of COVID-19 and floods by the government.

Schemes that got funds

The Cabinet approved ₹75 crore for implementation of the Amrith Gram Panchayats scheme under which 750 gram panchayats would be taken up for development, including installation of streetlights, supply of drinking water to each household, 100% segregation and disposal of solid waste, use of solar power, schools with digital libraries. Each GP would be given ₹25 lakh, Mr. Madhuswamy said.

It approved ₹225 crore for implementation of the Amrith Farmer Production Centres Scheme in which 750 production and marketing centres would be set up to help farmers, fishermen and weavers. Implementation period would be three years.

The Amrith Nirmala Nagara programme would be implemented in 75 urban local bodies (ULBs) for overall cleanliness and beautification at a cost of ₹1 crore per ULB. A total of ₹75 crore approved for the scheme.

Under the Amrith School Infrastructure Programme, ₹75 crore will be spent on providing basic infrastructure, such as a building, lab, library, toilets in 750 schools with ₹10 lakh each.

Amrith Self-Help Micro-Enterprises scheme will give a boost to 7,500 SHGs in Karnataka by allocating ₹75 crore to set up micro-enterprises with each getting ₹1 lakh.

A total of 750 government schools would be identified under the Amrith Community Development Programme, and each school would be given ₹10 lakh.

Under the Amrith Health Infrastructure Upgradation Programme, 750 primary health centres would be upgraded at an estimated cost of ₹20 lakh each, amounting to a total of ₹150 crore, Mr. Madhuswamy said.