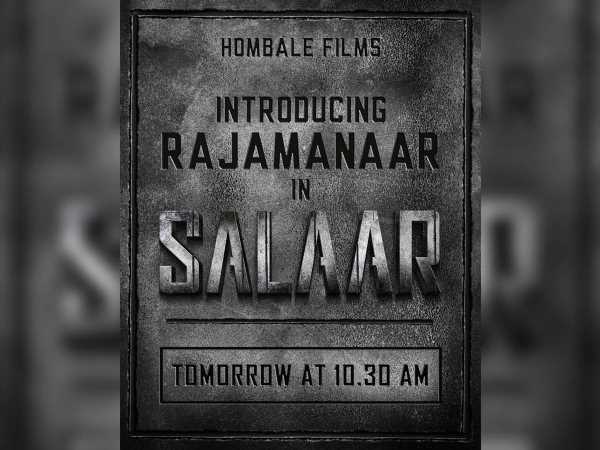 The young rebel star Prabhas and Shruti Haasan starrer action drama Salaar is another happening action thriller in Indian cinema right now. KGF fame Prashanth Neel is directing the film. The makers have wrapped up its second schedule, and the upcoming schedule will start next month.

It seems the makers of Salaar have decided to start the promotion.  The introduction of the Rajamannar character from Prabhas and director Prashant Neel’s high octane action entertainer  Salaar will be revealed tomorrow at 10:30 am. The makers confirmed the same officially by releasing a new poster.

Prashanth Neel’ directorial venture Salaar is being shot in Telugu and Kannada languages and  it will be released in multiple languages. Ravi Basrur  is composing the music for this film whereas the cinematography is handled by Bhuvan Gowda. The action drama Salaar also marks the Kannada debut of Prabhas. Kannada actor Madhu Guruswamy is playing a crucial role.

Earlier during an interview, Prashanth Neel revealed that it is not a remake of any of his previous movies but an original story especially written for  Baahubali and Saaho fame Prabhas. The film, which started its shoot on 29th January 2021,  and it is slated for the 2022 summer release.