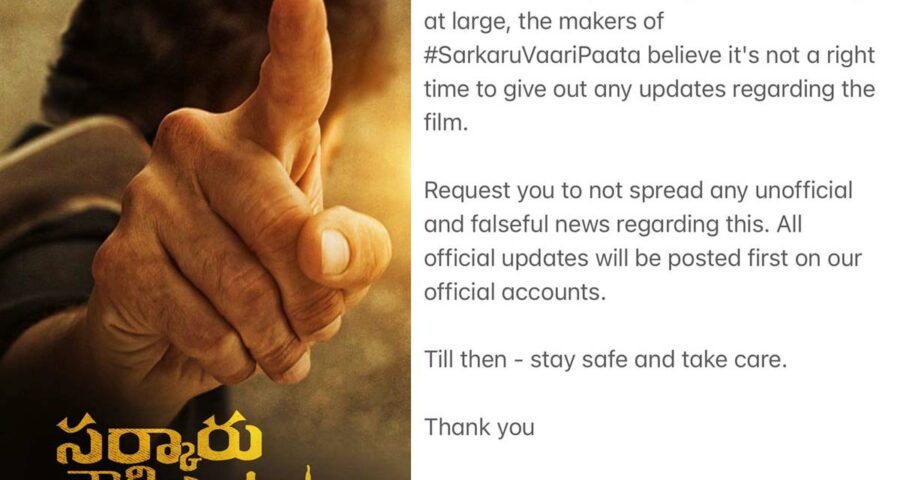 Telugu superstar Mahesh Babu requested his fans and the followers to not spread the false news about the first look poster of Sarakru  Vaari Paata.  The social media has been buzzing with speculations about the first teaser look to be released on Krishna Ghattamaneni’s birthday.

But now the makers of Sarkaru Vaari Paata have rubbished the reports. An official announcement from Mahesh Babu’ team has revealed that there will be no first look poster launch on 31st May as being speculated. The  further information will be shared through official sources and the team has urged everyone not to spread false news regarding the first look launch.

Sarkaru Vaari Paata, which has Keerthy Suersh as the leading lady, is being helmed by Parasuram, and  is produced under Mythri Movie Makers banner, Mahesh’s GMB Entertainments and 14 Reels Plus banners are jointly presenting it.  Thaman is on the board to compose the music of this film, which is based on the bank scam.

R Madhi is handling the cinematography and editing is done by Marthand K. Venkatesh. Sarkaru Vaari Paata will see Mahesh Babu in  never before avatar and Parasuram’ directorial venture is scheduled to release in January 2022 on the occasion of Sankranthi.