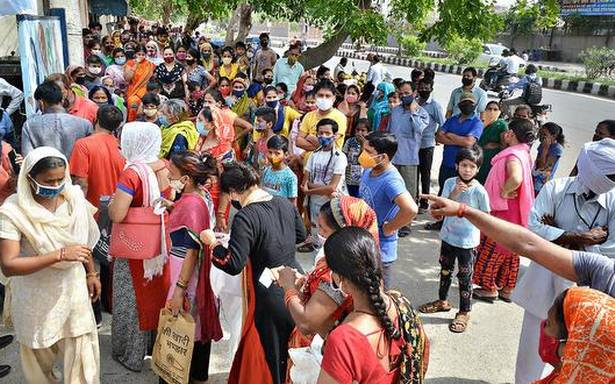 Despite several trips to distribution centres, many were unable to get foodgrains

The plight of city’s poor continued as several government centres distributing ration to non-cardholders kept their gates shut due to unavailability of ration.

People who had queued up outside some of the government schools said it had already been four days that they were returning home unsuccessfully as foodgrains had run out of stock at the centres.

Many said they were subjected to COVID-19 tests and given tokens and asked to return the next day, only to find the ration distribution centres closed.

Babli, a resident of Dakhshinpuri, who has been visiting a government school in Hauz Rani for the last four days said: “After hours of standing in a queue, I managed to enter the school on the second day but was told that I will not get the ration if I don’t undergo a COVID-19 test. So I got tested after which I was given a token and asked to come the following day by which time the stock had run out.”

“I am the sole earner in the family and have been out of work for all these months. Will the governments never think about the poor? They win elections because of us and once elected, they forget about the poor,” said Babli.

Zulekha Khatun, a resident of Jagdamba Camp in south Delhi, said: “First they said that we have to get tests done, which we did. But even after that all we have right now is a piece of paper which is supposed to act as a token. We did whatever they asked us to do but now what? How am I supposed to keep my children? My youngest child is five years old now.”

“I have been borrowing grains from others and feeding the family currently. But how long can this arrangement continue? I can’t even return to my village in Samastipur as we do not have enough money to buy tickets. There is not even enough to take an auto to the distribution centre. I walk for half an hour each side in this heat,” said Khatun.

With not enough money for basic sustenance, for many, making multiple trips to the distribution centres each day was equally challenging.

Fifty eight-year-old Abrana Khatun said: “If the government does not want to give us ration they can clearly state that. We are spending money each day and visiting the centre just to return empty handed. Last year during the lockdown, I at least got ration for a month but this time there has been nothing.”

Priyanka Devi, a domestic helper who has been out of work since the lockdown began said: “We are desperate at this point. I have been coming to the centre since Sunday. Most days we spend hours in the heat with empty-stomach as we feel that reaching early might improve our chances. But looks like there are no foodgrains available at this point.”