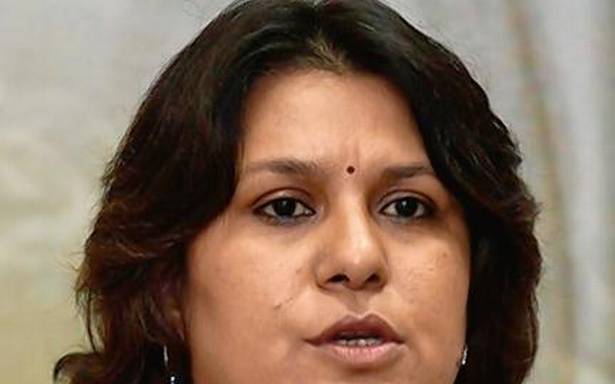 Party spokesperson says politicians need the will, not power, to serve people

Reacting sharply to the exit of Jitin Prasada from the party, the Congress accused him of playing “politics of convenience” and concentrating on short term gains.

At a virtual press conference, party spokesperson Supriya Shrinate, “You don’t need power to serve people, you need the will.” She also pointed out that Mr. Prasada had not shifted to a like-minded party, instead he had made a 360 degree switch. She questioned, “How is he comfortable being in the company of people who are responsible for the death of thousands of people because of their mismanagement of the pandemic? Where is his moral compass?”

After joining the BJP, Mr. Prasada claimed that it was no longer relevant to stay in a party where one could not protect the interests of people or work for them.

Ms. Shrinate said that his exit had to be placed in context. He had served as a minister of state during the UPA government’s tenure. “His father, Jitendra Prasada, fought and lost against Congress president Sonia Gandhi for the president’s post. And despite that, he was appointed as vice-president of the party and was given key posts till his untimely demise,” Ms. Shrinate said.

Jitin Prasada was given a Congress ticket to fight from Shahjahanpur Lok Sabha constituency in Uttar Pradesh at a very young age, Ms. Shrinate recalled. He was a permanent invitee to the Congress Working Committee (CWC), which is the highest decision-making body of the party.

Ahead of the West Bengal elections, Mr. Prasada was appointed as State in-charge. The Congress drew a blank in the elections. Mr. Prasada also participated in the CWC meeting where he presented a report on the reasons for the party’s debacle in the polls.

His appointment as the West Bengal State in-charge came to him despite having been being one of the 23 leaders who wrote a common letter demanding reforms and internal elections in the party for the president’s post. He has had three consecutive defeats. He lost the 2014 and 2019 Lok Sabha elections and in the last U.P. Assembly polls.

Mr. Prasada’s exit has also raised questions about the discontent expressed by senior party leader Sachin Pilot, who has once again questioned the leadership for not settling his grievances against the Rajasthan Chief Minister Ashok Gehlot. Ms. Shrinate said that the issues raised by Mr. Pilot will be addressed soon.

Mr. Prasada’s close friend Jyotiraditya Scindia who had joined the BJP from Congress last year is still waiting for his induction into the Narendra Modi Cabinet. He was awarded with a Rajya Sabha berth, but so far, has not got any crucial assignments within the party.

Another of Mr. Prasada’s friends and Maharashtra leader Milind Deora tweeted, “ I believe in @INCIndia as a party that can & must reclaim its position as India’s big tent party. We still have a strong bench that if empowered & optimally utilised, can deliver. I only wish that several of my friends, peers & valued colleagues hadn’t left us.”

In West Bengal, meanwhile, many of the leaders who left the Trinamool Congress ahead of the elections to join BJP, are now queuing up to return.