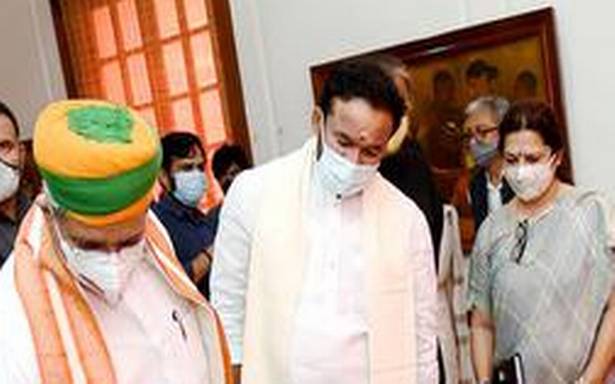 ‘Paintings, artworks from different parts of the country to be displayed at the gallery’

Union Culture Minister G. Kishan Reddy on Wednesday said the National Gallery of Modern Art (NGMA) here would be renovated and reorganised as a part of the commemoration of the 75th Independence Day next year.

Mr. Reddy, who visited the NGMA along with Ministers of State for Culture Meenakshi Lekhi and Arjun Ram Meghwal on Wednesday, said the NGMA was being renovated “in the context of Azadi ka Amrit Mahotsav as per the vision of Prime Minister Narendra Modi”, a Ministry statement said.

“The Minister explained that after the completion of the renovation and reorganisation works, the new look of the NGMA will be presented before the people as it will be rededicated to the nation. For this, a large number of paintings and artworks are being collected from different parts of the country to be displayed at the gallery and this collection will remain available for the future generations of the country,” the Ministry said.

Weeks after being appointed to their posts, the Ministers visited the historic Jaipur House that houses the NGMA, which was renovated recently, as well as the new wing that hosts exhibitions.