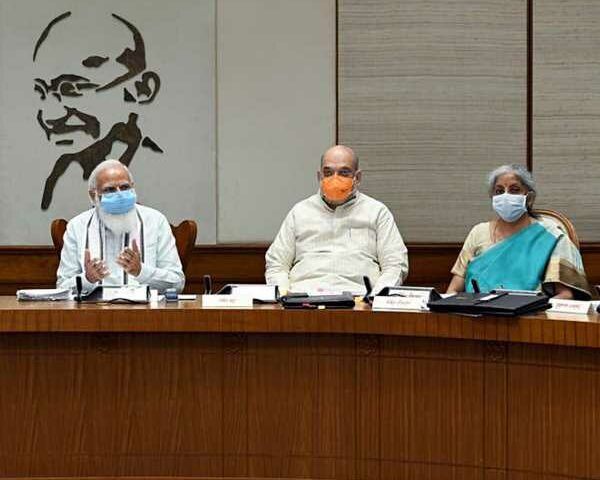 Strengthening the portfolios of the home minister and the finance minister is a message that should not be missed, points out A K Bhattacharya.

A fortnight has gone by since Prime Minister Narendra Modi effected his biggest ministerial reshuffle in his seven-year long tenure in South Block.

A 45 per cent increase in the size of the Union council of ministers in one stroke is almost unprecedented — with its strength going up from 53 to 77, excluding the prime minister.

About a dozen existing ministers were dropped earlier on July 7, making way for the expansion as well as promotion of about half a dozen ministers of state to Cabinet rank.

Even after this massive reshuffle, Modi has room for three more ministers as the size of his council could be as large as 81 ministers or 15 per cent of the total strength of the Lok Sabha.

Much attention has been focused so far on the ministers who were dropped. Most of the departures, including those of Harsh Vardhan from health and family welfare, Ravi Shankar Prasad from law and justice, communications, electronics and information technology, Prakash Javadekar from information and broadcasting, environment, forest and climate change, Ramesh Pokhriyal from education and Santosh Kumar Gangwar from labour and employment, are reported to have been caused by their non-performance or failure to handle the challenges in their respective areas of responsibility.

Their replacements, therefore, start their new innings with the burden of high expectations. They may be wondering how and where their predecessors had actually failed and whether the responsibility of their non-performance should have been shared with others in the government.

Be it the management of the pandemic, the rolling out of vaccines, enforcement of new information technology rules on social media companies, overseeing the government’s communication with the media or the handling of labour distress in a post-Covid world, the new incumbents are likely to struggle for strategies to overcome the failures of their predecessors.

For, the ground reality has not changed and the policy apparatus they have at their disposal is neither different nor substantially better than what their predecessors had.

No less challenging will be the assignment of the new incumbents in a host of economic ministries.

Ashwini Vaishnaw, a former Indian Administrative Service officer, is the new minister for railways. Expeditious implementation of the Bullet train project to connect Mumbai with Ahmedabad, the completion of the freight corridor, privatising new railway routes and modernisation of railway stations are not going to be easy tasks.

Then there is Hardeep Singh Puri, who having made slow progress in privatising Air India during his two-year stint as the civil aviation minister, is now entrusted with the even more challenging ministry of petroleum and natural gas.

International crude oil prices have risen by about 14 per cent in the last two years, with the domestic retail prices of petrol and diesel crossing the Rs 100-a-litre mark in many cities.

There is very little the new oil minister can do in the short run to alleviate the impact of high prices, except plead with the finance minister for a rollback of the excise duty increases effected in April-May 2020.

Puri may wish good luck to his successor in the civil aviation ministry, Jyotiraditya Scindia, given the knotty issues that have so far troubled Air India’s privatisation. But he should also be reasonably certain that the challenges he is to face in the ministry of petroleum and natural gas will be formidable.

Both Piyush Goyal and Dharmendra Pradhan have seen their portfolios streamlined. Without the railways, Goyal now is in charge of commerce, industry and textiles, in addition to consumer affairs, food and public distribution. Pradhan has lost the oil ministry, but now gets a comprehensive ministry on human resource development that includes education, skill development and entrepreneurship. There is considerable logic in the way the portfolios of both these ministers have been reorganised.

The new labour minister, Bhupendra Yadav, will have his task cut out. With trade unions resisting the enforcement of labour law changes, already passed by Parliament, Yadav will have to use all his skills to manage the trade unions and move fast on notifying the new labour codes.

From an economic and socio-economic policy perspective, the biggest impact of Modi’s massive ministerial overhaul will be on the portfolios of Finance Minister Nirmala Sitharaman and Home Minister Amit Shah.

Of the 30 Cabinet ministers, only six of them saw no change in their portfolios — Rajnath Singh (defence), Subrahmanyam Jaishankar (external affairs), Arjun Munda (tribal affairs), Gajendra Shekhawat (Jala Shakti), Pralhad Joshi (parliamentary affairs) and Mukhtar Abbas Naqvi (minority affairs). The portfolios for all other Cabinet ministers were either changed or their work load reduced.

But only two of the Cabinet ministers saw additional responsibilities in their portfolios.

Shah got the newly created ministry of cooperation. Clearly, the Modi government has decided to refocus its energies on developing the cooperatives sector, which accounts for 35 per cent of India’s sugar production, 10 per cent of milk production and is rapidly expanding its presence in the financial sector. Regulation and financial allocations would be key issues that will have to be settled as the new ministry gets down to its business.

Politically, too, the focus on cooperatives from the home minister will have the potential of reaping electoral dividends for the ruling party.

For Sitharaman, the strengthening of her portfolio took place almost on the quiet. Just before the reshuffle was announced, the department of public enterprises was shifted to the ministry of finance. This meant that in addition to the corporate affairs ministry the finance minister will have six departments under her charge.

Earlier, inter-ministerial differences would often stymie or delay the processes of divestment. Now with this department under the finance minister, Sitharaman should face no such problem in executing her Budget decision on privatisation and PSU asset sales.

In sum, Modi’s biggest ministerial reshuffle has laid special emphasis on privatisation by expanding the portfolio of his finance minister and on building the cooperatives sector by creating a new ministry for cooperation and entrusting that responsibility with his home minister.

In this context, strengthening the portfolios of the home minister and the finance minister is a message that should not be missed.