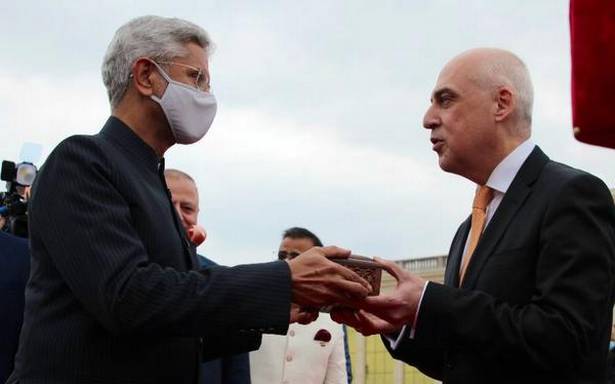 India concerned at direction of events in Afghanistan, says Jaishankar

U.S. President Joe Biden on Friday nominated Los Angeles Mayor Eric Garcetti as his ambassador to India. If confirmed by the Senate, Mr. Garcetti, 50, would replace Kenneth Juster, who served as India’s Ambassador to the U.S. during the Trump administration.

Ground Zero | Ending the shift between Jammu and Kashmir

The 149-year-old bi-annual tradition of shifting the capital of Jammu and Kashmir to Jammu during winters and Srinagar during summers is coming to an end. Peerzada Ashiq reports on a grand and expensive practice that led to the region becoming a melting pot of cultures and what its end portends for the people.

Defending champion Novak Djokovic absorbed a barrage of powerful hitting from Canadian Denis Shapovalov to reach his seventh Wimbledon final on Friday with a 7-6(3) 7-5 7-5 victory that kept the indefatigable Serb on course to write history.

News Analysis | A perception shift in relations between Sri Lanka and China?

From the time the pandemic struck last year, China has topped the charts in providing crucial and timely support to Sri Lanka — by way of over $2 billion in loans and a currency swap, and Sinopharm vaccines totalling over a million in donation, and about six million for procurement so far. However, despite the past and pandemic-time assistance, China is under more public scrutiny in the island nation than ever before.

The Supreme Court said on Friday that judges should not behave like “emperors” and summon government officials “at the drop of a hat”. The Supreme Court said there would be a “reaction” if judges cross the line of separation of powers between the judiciary and the executive to call officers to court “unnecessarily”.

In heeding to a long-standing request of Georgia, External Affairs Minister S. Jaishankar on Friday handed over to the country the holy relics of 17th century Georgian Queen St. Ketevan nearly 16 years after they were found in Goa.

The Indian cricket team’s six-match limited-overs series against Sri Lanka was on Friday rescheduled owing to a COVID-19 outbreak in the home team camp, with the first ODI now starting on July 17 instead of July 13.