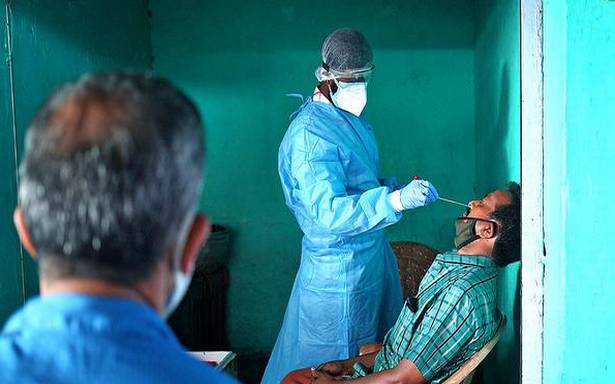 The Union Health Ministry has warned States that the Delta Plus variant, which is currently a variant of concern, has increased transmissibility, stronger binding to receptors of lung cells and potential reduction in monoclonal antibody response.

An explosion took place inside the high security Air Force Station in Jammu on Sunday. However, there are no reports of any casualties. The sound of the blast was heard from inside the Air Force Station, Jammu, around 1.40 a.m. The airport is used by the Army.

Thousands of farmers marking the seven-month anniversary of their agitation against three agricultural reform laws marched to Raj Bhavans on Saturday. They submitted a memorandum to President Ram Nath Kovind through the Governors, alleging an ‘undeclared emergency’ in the country.

The Centre informed the Supreme Court on Saturday that it will require 186 to 188 crore vaccine doses to twice inoculate the 93 to 94 crore population aged above 18 years. It said 51.6 crore doses would be “made available” by July 31.

Delta variant most transmissible: WHO

The Delta variant of COVID-19, identified in at least 85 countries, is the “most transmissible” of the variants identified so far and is spreading rapidly among unvaccinated populations, World Health Organization chief Tedros Adhanom Ghebreyesus has warned.

Given the high rates of rural job loss due to the COVID-19 pandemic, activists belonging to the NREGA Sangharsh Morcha wrote to Prime Minister Narendra Modi on Saturday, asking for an additional 50 days of work to be provided under the scheme, with funding allocated from the disaster management budget.

West Bengal government on Saturday set up an expert committee to examine the effect of fake vaccination administered to the people and take corrective action. Hundreds have been administered fake vaccines at camps set up by Debanjab Deb, who posed as an IAS officer and an official of the Kolkata Municipal Corporation.

U.K. Health Secretary Matt Hancock, who has led the country’s response to the coronavirus, resigned on Saturday, a day after apologising for breaching social distancing rules with an aide with whom he was allegedly having an affair. Sajid Javid will replace Mr. Hancock as health secretary.

The Board of Control for Cricket in India (BCCI) is set to formally inform the International Cricket Council (ICC) about its willingness to host the T20 World Cup in the United Arab Emirates and Oman from October 17 to November 14.

Italy scored twice in extra time through substitutes Federico Chiesa and Matteo Pessina to give the Euro 2020 title contenders a nerve-racking 2-1 victory over Austria on Saturday and a spot in the quarter-finals.