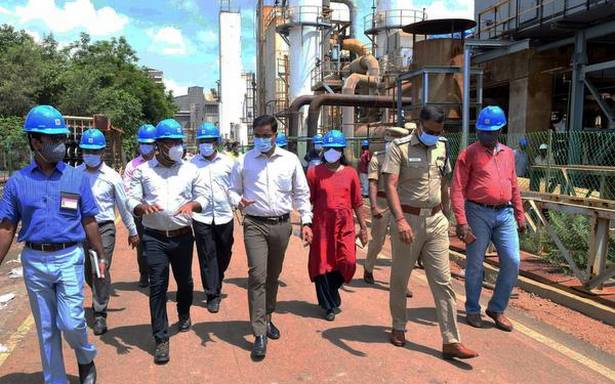 Generation expected to start within 48 hours

Members of the Monitoring Committee, constituted by the State government to oversee the operation of Sterlite Copper’s oxygen plant, visited the plant again on Tuesday.

After the first visit by the Committee on May 5, power and drinking water supplies were restored to the plant, which has been separated from other facilities on Sterlite Copper premises with a fence. Police personnel have been deployed around the oxygen plant to ensure that only the technicians with permission given by the district administration are allowed inside. The plant is expected to start oxygen generation on May 13 or 14 so that it will be in a position to produce 35 tonnes on May 15.

Sources in Sterlite Copper said the second oxygen unit would also generate similar quantity of oxygen after overhauling if it was asked to do so.

Even as the technicians of Sterlite Copper are preparing the oxygen plant, which remained defunct for the past three years following anti-Sterlite protests, Mr. Kanagavel, Mr. Amarnath and Mr. Bellarmine are visiting the plant every day to ascertain the progress of the work.