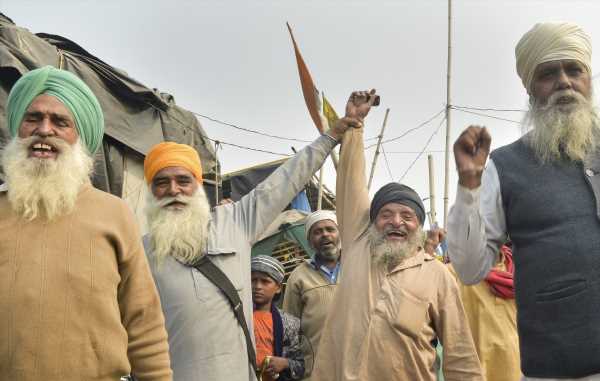 If Modi’s political retreat — he has tried to avoid a pre-1984 type of situation in Punjab — helps soothe Sikh sentiments, nobody should complain Modi, asserts Sheela Bhatt.

In his stunning address to the nation on Friday morning, Prime Minister Narendra Modi apologised to farmers while announcing his government’s decision to repeal the three farm laws first brought in as ordinances in June 2020 and later rushed through Parliament.

Why he offered an unprecedented apology and withdrew the important reforms in Indian agriculture is understandable. He himself gave a clue by doing so on a very important day in the calendar of Sikhism.

Modi announced the historic political decision of his defeat on Guru Nanak Jayanti, the birth anniversary of the founder of Sikhism, and on the birthday of former prime minister Indira Gandhi who was assassinated by her Sikh bodyguards angered by Operation Bluestar.

Modi’s farm laws provoked not only farmers in Punjab, Haryana and Western UP as it concerned them the most, but it somehow made the Sikh community suspicious of the Bharatiya Janata Party and the Modi regime.

That was the crux of the matter behind the politics around the farm laws.

Also, the farm laws disturbed the status quo of the network of political leaders and artiyas in Punjab. So when then tremendous backlash against the law came the BJP proved inadequate to handle it in Punjab, parts of Haryana and Western UP.

Vested interests told ordinary Sikhs that if the farm laws were implemented, it would dry up the coffers of gurdwaras all over India in a couple of decades as the reforms target those Sikh farm leaders who control the procurement of grains, which is a multi-billion rupee business. The economy of gurdwaras, Punjab politics and the political leaders’s control of trade in mandis worth billions of rupees are intricately related.

After the laws were passed the suspicion that they targeted the Sikh religious eco-system spread like wildfire.

In the villages of Punjab Modi became a hate figure.

The Samyukta Kisan Morcha, which led the agitation, exploited Sikh emotions to the fullest. The SKM has been focused and determined as they had enormous resources.

The Sikh community’s unity, intelligent, courageous and experienced Left-leaning farmers’s hold on the ground and tremendous resources led to a historic victory of the year-long farmers’s struggle in India.

Modi’s regime pushed through the farm laws in Parliament even though BJP leaders and cadres were divided on the issue. The moot question was, what kind of and how much political price should the party pay for forward-looking agro-trade reforms?

Also, the drafting of the laws was poor and created a rift within.

One clause, in fact, kickstarted the fall of the BJP’s politics on the farmers’s issue.

The Farmers Produce Trade and Commerce (Promotion and Facilitation) Act, 2020, which will be now repealed in Parliament, provides for a dispute resolution mechanism in Chapter 3, section 8 of the Act.

It says the trader and the farmer’s dispute will be heard and settled by a conciliation board appointed by the sub-divisional magistrate and the decision will be binding on the parties.

This was the most problematic clause which put the farmer at the sub-divisional magistrate’s mercy. Barring this one clause, the farm laws were modern and in the interest of the farmers. The government had agreed to withdraw this particular clause during negotiations with the SKM.

But the BJP’s propaganda machinery could not counter the united might of Sikh leaders, Jat farmers and anti-BJP forces.

The BJP will have to lie low and assess the political damage to Modi’s image of being a strong leader.

Of course, not all is lost for Modi and the BJP.

Modi has swallowed his pride on eve of state elections to cut his losses, but once the storm passes, states where the BJP is in power will bring back the farm laws sooner than later.

Once again, it needs to be reiterated that Modi’s decision to repeal the farm laws has more to do with the Rashtriya Swayamsevak Sangh/BJP’s understanding of Sikh sentiments and less about the farm laws themselves.

Modi has tried to avoid a pre-1984 type of situation in Punjab — which could not be controlled for a decade, with the nation paying a heavy price, including the life of a prime minister.

It is the government’s belief that the anti-farm laws movement was supported in Punjab by pro-Khalistan forces. Modi has already indicated that his party would address Sikh sentiments at the BJP national executive meeting last week.

It is obvious that Modi’s decision is also an acknowledgment that the BJP is not strong on the ground where this agitation has been successful.

However, it doesn’t undermine the SKM’s strong ground-level movement at all. By all accounts, it added to the pressure that led to today’s huge decision.

The farm laws would have been used to alienate the Sikh community from Hindus in Punjab, and the BJP has seen the symptoms of a pre-1984 ground situation.

As the farmers leaders scored a victory, they are asking for a statutory guarantee of remunerative prices for all agricultural produce and for all farmers, and the withdrawal of the Electricity Amendment Bill.

Today’s address to the nation by the prime minister and his apology to farmers will haunt Indian politics for a long, long time.

However, if Modi’s political retreat helps soothe Sikh sentiments, nobody should complain.