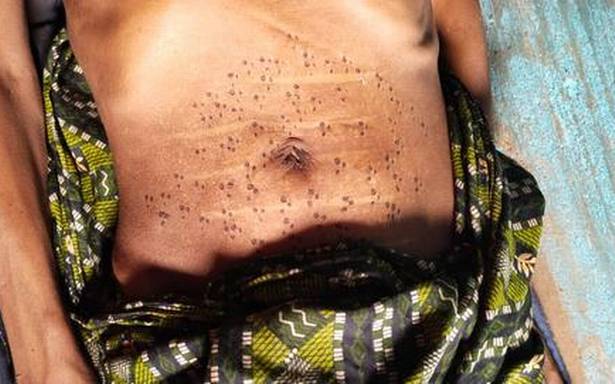 A man in Odisha’s Keonjhar district died after his family members branded him multiple times on the stomach with a hot iron rod to cure him of tuberculosis.

Thirty-four-year-old Bikash Dehury of Uppar Kainsari village had dozens of wounds on his stomach. He died on Wednesday. Dehury is survived by his wife Draupadi Dehury, a daily wager, and two sons.

His family members had been branding him ever since he fell ill.

“Though Uppar Kainsari is only 15 km from Keonjhar district headquarter town, branding appears to be the first line of treatment for any disease in this tribal dominated village,” said Sanjib Sahoo, an activist working in the locality. In fact, almost all residents of Uppar Kainsari have suffered branding at some point in their lives.

Mr. Sahoo said nine persons, mostly aged below 45, had died of tuberculosis in the past 18 months in the village.

Uppar Kainsari village is situated close to the Gandhamardan Iron Ore mine being operated by State-run Odisha Mining Corporation (OMC). Iron ore mining and its transportation have had an adverse effect on the health of the tribal population. Locals have long been protesting against mining.

“Very few men reach the age of 50 in this village. Most men complain of constant cough and chest pain. Since all the villagers are tribals and do not have robust income sources, they cannot afford medical care,” said Sanjay Dehury, a resident of Nitigotha village, adjacent to Uppar Kainsari.

Mr. Dehury said mining had polluted all streams and water sources. “On a couple of occasions, the OMC had set up temporary medical camps, but it was not enough,” he said.

Mohan Charan Majhi, local MLA and Bharatiya Janata Party Chief Whip in State Assembly, acknowledged the health crisis prevailing around the iron ore mine. “I had personally written to the State Health Minister about people being affected by tuberculosis and bronchitis. A team had visited the village. In fact, some of them were admitted to the Keonjhar district headquarter hospital. However, they were discharged after two or three days,” he said.

Mr. Majhi pointed out that 15 persons in a few villages near OMC’s iron ore mine had died in the last 18 months with similar symptoms. He demanded proper health screening of all the villagers and a research to identify the root cause behind the fatalities.

According to experts, Keonjhar district alone has around 25% of India’s iron ore reserves.