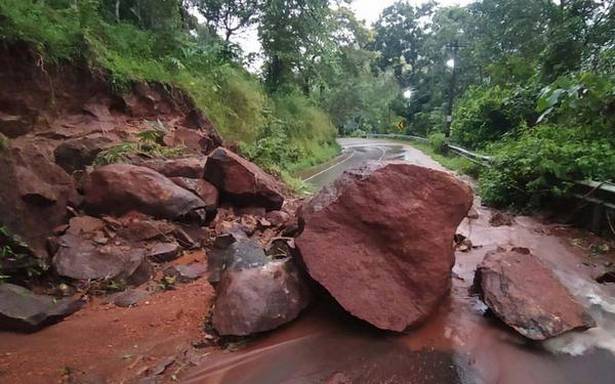 The eastern high ranges of Kottayam and Pathanamthitta, which came under a spell of extreme showers on Wednesday midnight, were hit by a series of landslips in the early hours of Thursday.

According to officials, back-to-back mudslides were reported inside the forests at Kanamala and Mookkenpetty in Erumely in Kottayam district, and Kodamala and Kokkathodu at Konni in Pathanamthitta.

Residential areas in the downstream of these locations witnessed a heavy gush of water and mud, which entered several houses and commercial establishments. Crops in several acres of land were reported to have been destroyed. Vehicles, including autorickshaws and two-wheelers, were washed away or got stuck in the mud.

No causalities were reported though an old woman, a native of Kanamala, had a narrow escape after being caught in the influx of mud. As many as 34 people from nine families have been shifted to a relief camp opened at Kanamala.

In Pathanamthitta, at least four houses at Kokkathodu were completely destroyed. As per estimates, Achencoil received 179 mm of rainfall while Avanipara received 245 mm.

A seven-member team of pilgrims from Varkala which had gone to the Achencoil temple through the forest route from Konni were trapped inside the forest for several hours.

The back-to-back mudslides also caused a sharp rise in the water level of the Achencoil and Kallar rivers, which inundated several houses on its banks.

Teams of the Fire and Rescue Services were deployed in the disaster-struck locations. Revenue officials led by the tahsildar and the village officer coordinated the rescue and relief operations in respective locations.