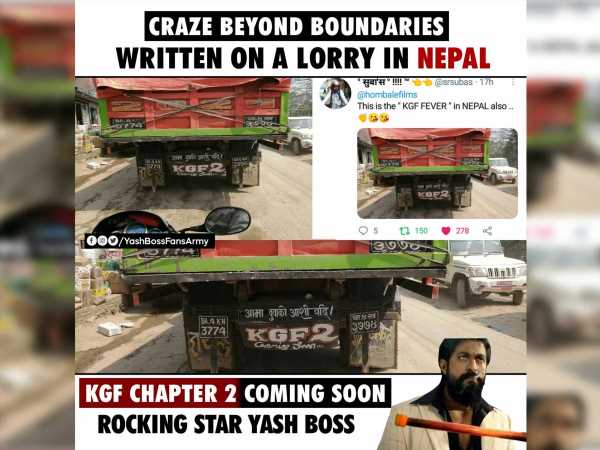 KGF : Chapter 2  starring Yash and Srinidhi Shetty is one of the much hyped movie of Indian film Industry, which is directed by Prashanth Neel.  The photographs of a lorry in Nepal displaying KGF 2 on its back reveals just a glimpse of the craze for this upcoming big budget gangster drama in even foreign territories outside the  India. The pic of lorry was posted by a Nepali KGF fan on social media which are going viral and grabbing the attention of Yash fans.

Earlier during an interview Mission Mangal  helmer Jagan Shakthi,  had spoken about the impact of KGF: Chapter 1 in Bollywood and about the popularity of Rocking Star Yash among the Hindi audience, by saying, “ Yash starrer KGF has changed a lot for Sandalwood.” According to Jagan Shakthi, the success of the films like Baahubali  series KGF have given confidence to  the makers that they do not require a Bollywood actor to do a Hindi film.

The second instalment of  Prashanth Neel’ directorial venture KGF 2 is being eagerly awaited by the fans with Sanjay Dutt and Raveen Tandon’ inclusion the expectations have also increased.

With  B town actors Raveena Tandon  and Sanjay Dutt joining the cast, KGF 2 has got bigger and better.  Prashanth Neel’ film is all about the story of rise and fall of Rocky Bhai.