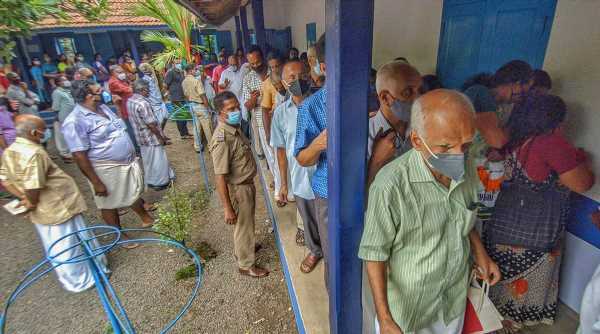 The test positivity rate was recorded at 13.87 per cent.

As many as 84 healthcare workers also tested positive for Covid-19 since Saturday. While 116 of the new patients had come from outside the state, 17,610 people contracted the virus through contact. The infection source of 797 remained unknown, the government added.

Around 4,90,858 people are currently under observation in the state, out of which 4,61,530 are under home/institutional quarantine and 29,328 in hospitals, it added.

Days after a duty doctor was attacked at Fort Taluk hospital here, the Kerala Government Medical Officers’ Association (KGMOA) on Sunday petitioned the Chief Minister to increase the security at hospitals and submitted a set of suggestions.

The KGMOA said the facilities at hospitals were inadequate to prevent attacks resulting in affecting the smooth delivery of essential medical care to common people.

“The repeated incidents of hospital attacks in the recent past have demoralised doctors who have been tirelessly working in the forefront to control the Covid pandemic. We are sure that you understand the gravity of the situation and will see to it that such untoward incidents are not repeated,” the Association said in a letter addressed to Chief Minister Pinarayi Vijayan.

Police had on Friday arrested two people for attacking a duty doctor and a security guard at the Fort Taluk hospital on Thursday night.

As part of the suggestions, KGMOA asked the state government to recognise all healthcare institutions under Kerala State Health Services as special security zones under Section 83 of the Kerala Police Act 2011.

The doctors also demanded that all cases of hospital attacks should be charged under Hospital Protection Act (The Kerala Health Service Persons and Healthcare Services Institutions (Prevention of Violence and Damage to Property) Act 2012 and sought prompt action against the culprits of hospital violence.

“The patient load in most healthcare institutions is unmanageable due to improper staff patterns. Doctors and paramedical staff are inadequate for the increased patient load. Necessary steps should be taken to assess the patient load of individual institutions and increase the number of posts accordingly,” the KGMOA said.

On Thursday night, the two accused attacked the duty doctor and verbally abused her.

The accused were at the hospital to get their wounds caused during a drunken brawl treated.

Police said they refused to wait and started abusing the doctor and attacked her and the security guard.