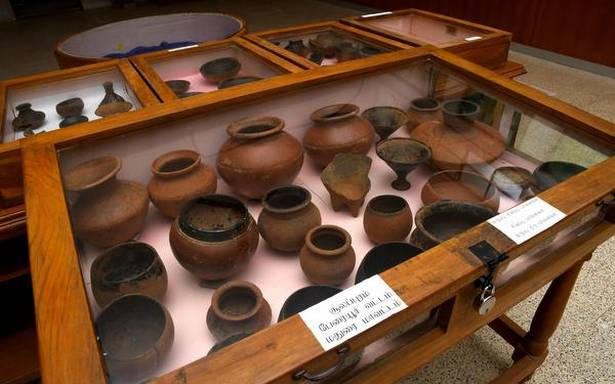 Over 500 artefacts that were found during archaeological explorations by historians and researchers at Soolapuram under Peraiyur taluk have been exhibited for public viewing at Government Museum here.

The artefacts, said to belong to 1,500 years B.C., include blackware and redware pottery, glass beads and carnelian beads and iron knives. “They were found by researchers of Pandian Nadu Historical Research Centre and Prof. Murugesan of Gandhigram Rural Institute a year back and were handed over to Peraiyur tahsildar,” said Government Museum Curator M. Maruthupandian.

The district administration handed them over to the museum for public display. “They will be interest to historians and scholars,” Dr. Maruthupandian said. Graffiti markings have been found on five articles. The presence of carnelian beads has proved that the raw materials had been brought from Afghanistan and Rajasthan and were polished in Tamil Nadu.