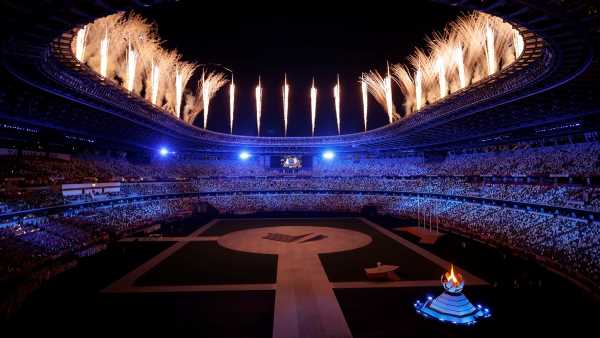 Images from Sunday’s closing ceremony at the Tokyo Olympics.

Tokyo handed its Olympic flag to the mayor of Paris on Sunday, setting the stage for the next Games in 2024 at a closing ceremony that featured park scenes of both cities, emphasising human contact even as the pandemic continues.

In Tokyo, athletes got a surreal glimpse of everyday Tokyo life on Sunday when the closing ceremony was briefly transformed into a park with grass, buskers and BMX riders in a valediction after weeks spent under the regime of a pandemic Games.

Performers danced, skipped and played soccer, mingling and waving to athletes, who gathered closely together on the grass. Organisers said the scene was meant so they could “experience Tokyo”, a poignant nod to the fact that many spent their time at the Games cooped up in rooms or competing in venues.

It was a duly odd closing to a Games that were upended by the pandemic and then transformed by the drama of politics, sport and personal turmoil. 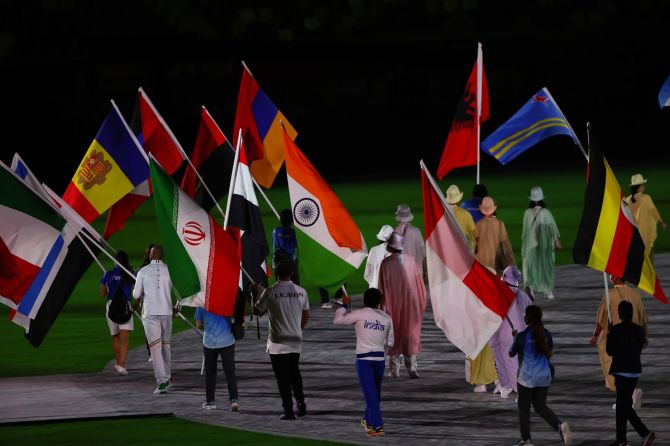 The Tokyo Olympics were originally intended to show Japan’s recovery from a devastating earthquake, tsunami and nuclear crisis in 2011.

After being postponed for a year, organisers said the Games would serve as a symbol of the world’s triumph over the pandemic. Held without spectators and with COVID-19 variants resurgent, the Games fell short of triumph and the financial windfall Japan first sought.

Instead, the host nation is saddled with a $15 billion bill, double what it initially expected, and with no tourist boom to offset it.

In Paris, several thousands sports fans waving the tricolour flag thronged into a fan zone across the river from the Eiffel Tower as the French capital prepared to take the Olympic baton from Tokyo. Pop music blared out as Tokyo medallists Teddy Riner and Clarisse Agbegnenou bounced on stage. Plans to fly a giant Olympic flag from the Eiffel Tower were abandoned because of strong winds.

France promises a 2024 Summer Olympics “for the people” after a pandemic-hit, spectator-less Tokyo Games. In a sign that those days are far from close, though, public entry to the fan zone was permitted only upon presentation of a vaccine certificate or negative COVID-19 test.

In a nod to diversity, a victory ceremony was held for the first time for both the women’s and men’s marathon event. The Kenyan anthem filled the 68,000-capacity stadium twice, for gold medallists Peres Jepchirchir and Eliud Kipchoge. 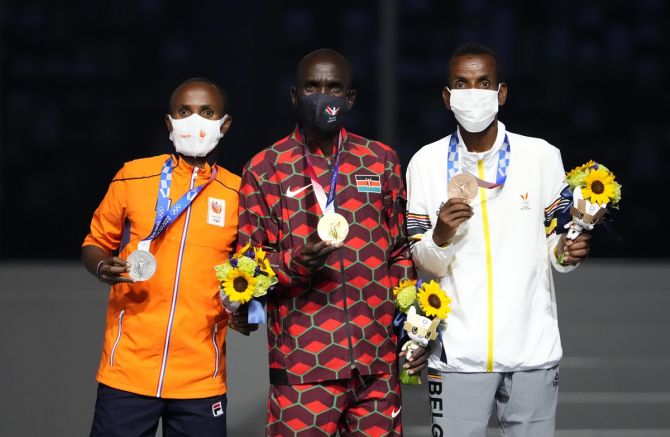 Still, organisers appear to have prevented the Tokyo Games from spiralling into a COVID-19 superspreader event, notable given that some 50,000 people came together amid the pandemic.

In a sign of the measures, winners accepted their prizes from trays, putting the medals around their own necks, although social-distancing protocols preventing hugging, for example, were largely ignored throughout the Games.

While the bubble – the set of venues and hotels to which Olympic visitors were largely confined – appeared to hold, elsewhere some things fell apart. Fuelled by the Delta variant of the virus, daily infections spiked to more than 5,000 for the first time in Tokyo, threatening to overwhelm its hospitals.

Japan’s record medal haul also helped to take out some of the sting for organisers. The United States finished top of the tally with 39 gold medals, one more than rivals China at 38 and Japan at 27.

Japan handed over the Olympic baton to the next host city, Paris, at the ceremony. 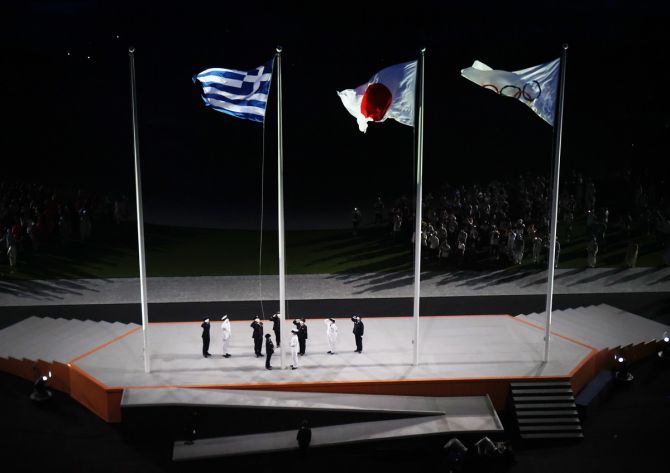 After a year’s delay and often against the backdrop of cavernous, nearly empty venues, the Games themselves provided plenty of high drama.

That culminated with the defection of Belarusian sprinter Krystsina Tsimanouskaya who, in a moment more reminiscent of the Cold War, refused to board a flight home after she was taken to the airport against her wishes.

She has since sought refugee status in Poland. United States superstar gymnast Simone Biles shocked the world when she pulled out of five of her six events, including abruptly abandoning the women’s team final after attempting just one vault, citing concerns for her mental and physical health.

The 24-year-old spoke with candour about struggling to deal with the weight of expectation placed on her and made the world aware of the “twisties”, a mental block that prevents gymnasts from performing their gravity-defying skills.

Biles ultimately came back to win the bronze on the balance beam in the final event of the women’s gymnastics programme, a moment of triumph that crystallised her transformation from Olympic champion to advocate for mental health.

In athletics, Italy provided a different kind of shock with their amazing run. Their wins included a stunning gold in the men’s sprint relay, taking their athletics gold tally to five.

In swimming, the United States were without 23-time Olympic gold medallist Michael Phelps for the first time since the Atlanta Games in 1996 and, while their gold count slipped, they still ended the meeting on top of the medals table with 30 in total.