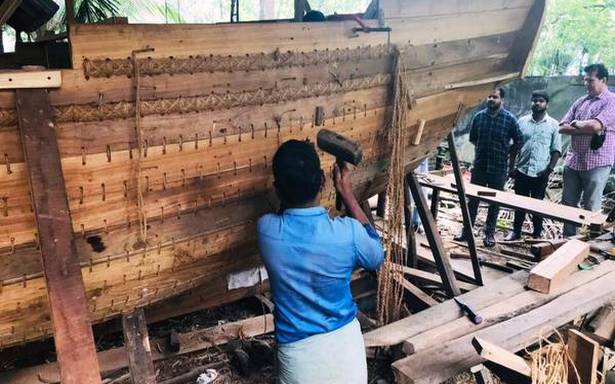 Taking pride place among the exhibits at Qatar during the FIFA World Cup next year will be a special dhow built far away in a village in Kerala.

Recreating the vessels used by Arab traders about 800 years ago when they sailed to Kerala, the dhow being made at a Chaliyam in Kerala’s Kozhikode will not have a single nail or metal piece. Instead traditional coir ropes will hold together the teak pieces .

In special dhow nearing completion at the Pattermadu dhow making unit at Chaliyam hundreds of metres of coir ropes are used to tie the golden teak pieces together.

“It is going to be the pride of not only Qatar, but our tradition as well. We have been making dhows for centuries, and the impression our craftsmanship and skills made in the world was quite deep,” said P.O. Hashim, managing director of Haji PI Ahamed Koya boat builders.

Mr. Hashim’s company has made over 200 dhows. “This one is a prestigious one not because of its size, but because of its uniqueness. Nowhere in the world is such a vessel being made now,” he said.

A dozen-odd craftsmen under the leadership of Gokul Edathumpadikkal have been working for over three months for the 27-ft-long coir dhow.

The six-foot deep vessel has a width of seven foot. Hundreds of holes were made on the teak wood, specially acquired from Nilambur. Using a traditional technique, coir rope is run through the holes to tie the pieces together. A special marine oil will be applied on the ropes before the dhow is launched into the water.

“The marine oil will add more strength to the rope when it comes in contact with the seawater,” explained Mr. Gokul.

The dhow will set sail for Qatar in a few weeks. Mr. Hashim’s company has had a long association with Qatar and other Gulf nations. According to him, it was that association that fetched him this prestigious contract to showcase the traditional dhow.