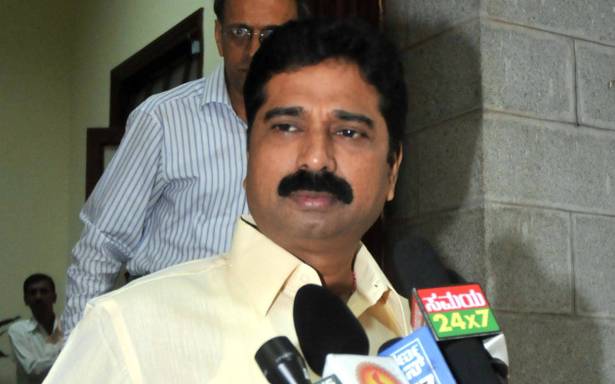 Sagar MLA Hartal Halappa took a “truth test” at Dharmasthala temple on February 12 to “prove” that he did not take money from those in sand mining in Sagar and Hosanagar taluks in Shivamogga district. He had announced to take the test in response to former MLA Belur Gopalakrishna’s allegation.

Mr. Halappa, speaking to press persons after having darshan of Lord Manjunatha, said the former MLA had accused him of taking commission from people those into sand mining and also challenged him to take the “truth test” in Dharmasthala.

“Today I made a submission before the deity that neither I nor my family members took money from any person engaged in sand mining in Sagar and Hosanagar taluk. The former MLA had made allegations against my friend Vinayak Rao and my nephew Ravindra. Both of them accompanied me and made their submission in the temple”, he said.

Mr. Halappa also met Dharmadhikari Veerendra Heggade and briefed him on the purpose of his visit to the place on the day. Former MLA Belur Gopalakrishna is expected to visit Dharmasthala later today and submit his statement.