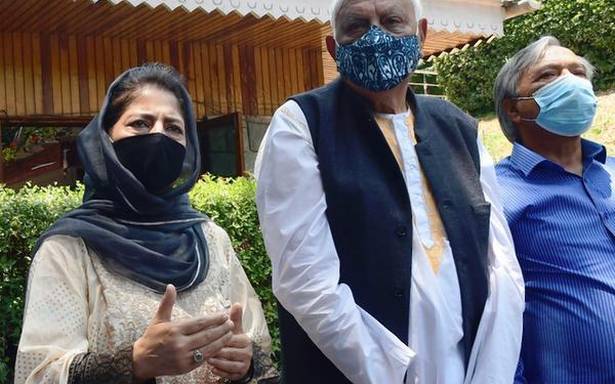 The sole motive of the alliance, according to its head Farooq Abdullah, “is to fight for the restoration of the August 4, 2019 position”.

The journey of the Gupkar Alliance, as the PAGD is widely called, has already witnessed many ups and downs. It was after the sundown of August 3, 2019 that the PDP’s Mehbooba Mufti started visiting her rivals’ houses amid speculation that the Centre was planning something big.

J&K’s political class was clueless then and could not read the reasons for the unprecedented security measures taken by the Centre in the State, such as asking tourists to leave and stopping the Amarnath yatra in the middle.

On August 4, 2019, the Gupkar declaration was signed at the residence of Mr. Abdullah, located on Srinagar’s Gupkar Road, by eight political parties, including the Congress. The 169-word declaration unanimously resolved to protect the identity, autonomy and special special status of J&K, fight against modification or abrogation of Articles 35A, 370 and oppose any bid to carry out the unconstitutional delimitation or trifurcation of J&K. “It (such actions) would be an aggression against the people of Jammu, Kashmir and Ladakh,” the declaration reads. All the leaders sought an audience with the President and the PM but failed.

Finally, Prime Minister Modi met the Gupkar Alliance leaders on Thursday, but only after the government put them in jail for eight to 13 months, with Ms. Mufti, Mr. Farooq Abdullah and Omar Abdullah booked under the controversial Public Safety Act. The incarceration, however, seemed to have cemented the bond between the local rivals who nursed a deep sense of hurt, betrayal and despair.

Despite many second-rung leaders and workers remaining in jails, the Gupkar Alliance emerged a formidable force during the District Development Council (DDC) polls in J&K in November-December 2020, amid allegations that the State machinery favoured BJP candidates during the campaigning.

In the run-up to the polls, Union Home Minister Amit Shah even termed the alliance ‘Gupkar Gang’, which became a catchphrase for the electioneering carried out by top BJP leaders. When results came in, the alliance won 110 out of 280 segments, while the BJP managed to win only 75. The results and the alliance’s domination in most districts of Kashmir as well as in Jammu may have contributed to the softening of the Centre’s approach towards the grouping.

The Gupkar Alliance first saw the Congress distancing itself in 2020 because it did not want to be seen clamouring for Article 370, which would have impacted the party’s electoral prospects in the rest of the country. They suffered another setback when Sajad Lone, who was the alliance spokesman, decided to quit the group, alleging “the partners fought against each other during the DDC polls”. Omar Abdullah also started maintaining a conspicuous absence from the amalgam’s key meetings in recent months. The alliance is now reduced to three key faces: Farooq Abdullah, Ms. Mufti and M.Y. Tarigami of the CPI(M). The trio is both the binding and frictional force within the group, with each leader professing politics contrarian to each other.

The meeting with the PM was both an opportunity and a challenge for the alliance. It’s an opportunity because the Centre reached out to them and they could push for their declared goals with the government. It’s a challenge because there would be questions whether the decision to meet the leaders who ended the special status to J&K yielded any tangible result.