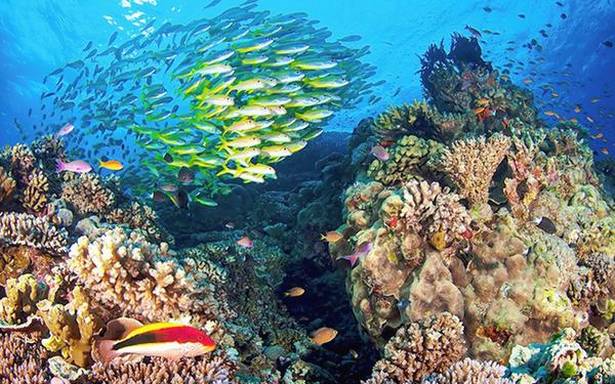 The GBR is about 2,300 km long and extends across a breathtaking 346,000 sq. km. area, hosting an assemblage of fishes and invertebrates in the reefs, dugongs, green turtles and other species in seagrass meadows, and sharks, rays, anemones, sponges, worms and myriad other forms all of which need a delicate ecological balance to thrive.

The GBR won a place on the World Heritage List under the World Heritage Convention, 1972, as it has outstanding universal value, which UNESCO defines as “cultural and/or natural significance which is so exceptional as to transcend national boundaries and to be of common importance for present and future generations of all humanity.”

Idyllic as it appears, the reef system faces severe environmental threats, and this year, the World Heritage Committee has sounded a warning by drawing up a resolution to inscribe the reef on the ‘List of World Heritage in Danger’. The Committee took note of the 2019 Outlook Report of the Great Barrier Reef Marine Park Authority, which says in no uncertain terms that the long-term state of the ecosystem has further deteriorated from poor to very poor. At the heart of the crisis is climate change, which has led to three big events of coral bleaching in 2016, 2017 and 2020. UNESCO’s move to list the GBR as ‘in danger’ brings pressure on Australia’s government, which is often criticised as being more sympathetic to fossil fuel industries than environmental concerns, to review its record on responding to climate change. As a continent that has recorded a rise in its average temperature by 1.4 degrees C since 1910, the devastating fires of 2019-20 were another wake-up call on climate change aggravating extreme events.

The World Heritage Committee resolution calls upon Prime Minister Scott Morrison’s government to heed the conclusions of the Outlook Report, particularly on accelerated action needed to address climate change with the Paris Agreement goals in focus. The updated Reef 2050 Plan that the country is pursuing for conservation should incorporate this. Further, the government should stop destructive impacts of human activity such as land-based and farm run-off that has polluted waters, coastal development and other commercial uses, it adds.

The World Heritage Centre, the administrative body, had sent a letter to Australia in 2019 raising concerns “about the approval of the Carmichael Coal Mine”, a controversial project with impacts for the reef and the climate, to which it got a response noting “that the project’s approval is subject to over 180 regulatory conditions and that compliance with these conditions will be monitored.”

Canberra’s response to the UNESCO Committee’s move — a similar previous ‘in-danger’ listing was staved off in 2017 — was to allege a conspiracy, hinting at pressure from China, which holds the chairmanship of the panel. Ties between the two nations have soured in recent times.

Close scrutiny of the GBR shows a variety of ecological impacts from environmental stresses, including climate change. The Outlook Report records harm to “the abundance and health of many species groups, including corals, invertebrates, some bony fishes, marine turtles and seabirds” from the rising sea temperatures and thermal extremes due to global warming. It adds that since 2014, there has been widespread and significant declines in many coral species. In 2018, coral larvae declined by 89% averaged across the region, arising from consecutive bleaching events, as the adult broodstock was reduced.

Warmer temperatures led to “feminisation of green turtles originating from nesting beaches in the northern Region, potentially leading to significant scarcity or absence of adult males in the future”. Coral growth is also endangered by the proliferation of crown-of-thorns starfish, which consumes them — the starfish population has shot up as predators declined due to overfishing.

Some relief is available from the reported recovery of humpback whales, and slow gain in southern populations of green turtles. Urban coastal dugong populations also show an improved breeding rate. But overall, the reef is under threat and without determined action, would be severely impoverished.

A magnet for eco-tourists, the vast expanse coloured by magnificent algal hues draws thousands annually. The Outlook Report says that in 2015-16, tourism, fishing, recreational uses and scientific activities contributed an estimated $6.4 billion to the Australian economy, representing a rise of about 14% since 2011-12. Without resolute action on climate and pollution threats, though, all sectors stand to lose.