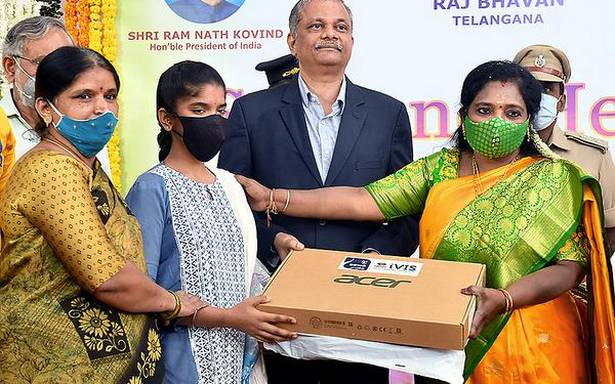 Governor Tamilisai Soundararajan has opened a suggestions and grievances box at the Raj Bhavan to enable people to share their ideas, suggestions, and bring their grievances to the notice of Raj Bhavan.

The suggestions box will act like a bridge between the government, its agencies and people, said Ms. Soundararajan, who interacted with media personnel on the occasion of the New Year. She said that Telangana State, although the youngest, is one of the fast progressing States in the country. She exhorted all sections of people to join hands for the continued development of the State.

She called upon all the sections of the people to worship their work and contribute for the State and nation’s development. She asked the people to promote and eat traditional and nutritional food so as to improve immunity in times of pandemic.

She asked all people to follow COVID-appropriate behaviour to keep the pandemic at bay with the collective will and efforts.

On the occasion, the Governor handed over laptops to 20 needy students to enable and empower them to be an equal learner in the online education mode too. Seven of the beneficiaries were physically challenged, while the remaining belonged to the underprivileged sections.

The Governor appreciated the laptops contribution by philanthropic organisations and individuals. The donations were in response the an earlier call given by the Governor asking the IT companies, organisations, individuals and others to donate laptops and tabs to distribute to the needy. The Raj Bhavan has received around 2,000 requests from students for laptops.

Secretary to Governor K. Surendra Mohan and other senior officials were present on the occasion.