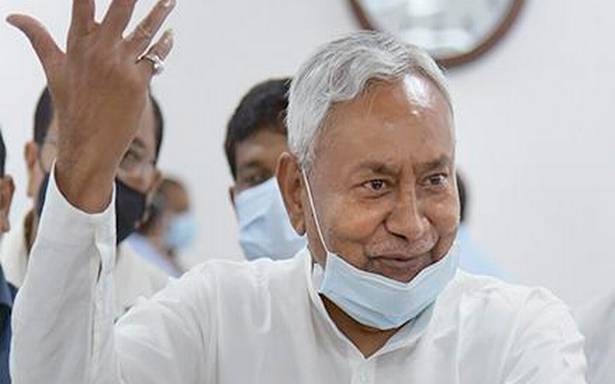 Both Deputy Chief Ministers – Tarkishore Prasad and Renu Devi – too have declared the details of their assets and liabilities.

As per details of assets of the chief minister and his cabinet colleagues uploaded on the Bihar government website on December 31, Kumar has ₹ 29,385 in cash and nearly ₹ 42,763 deposited in the bank, while his son Nishant has ₹ 16,549 in cash and ₹ 1.28 crore in Fixed Deposit (FD) or deposits in various banks.

The chief minister has one residential flat in a cooperative housing society at Dwarka in New Delhi, while his son has agricultural land and residential houses at Kalyan Bigha and Hakikatpur (both in Nalanda district) and Kankarbagh in Patna.

As per the declaration, Nishant has agricultural land at their ancestral village Kalyan Bigha. He also has non-agricultural land in the village. The chief minister has also declared that he owns 13 cows and nine calves worth ₹ 1.45 lakh.

The Nitish Kumar government had earlier made it mandatory for all cabinet ministers to disclose their assets and liabilities on the last day of every calendar year.

Both Deputy Chief Ministers – Tarkishore Prasad and Renu Devi – too have declared the details of their assets and liabilities.

Interestingly, Kumar’s cabinet colleagues are also richer than the chief minister. Mukesh Sahani, founder of the Vikassheel Insaan Party (VIP), comes in the list of the richest ministers in his cabinet.

The VIP is part of the National Democratic Alliance (NDA) government in Bihar. Minister of Animal Husbandry and Fisheries Mukesh Sahani has deposits of ₹ 23 lakh in banks. He owns three properties in Mumbai worth more than ₹ 7 crore. He and his wife also own a flat each.