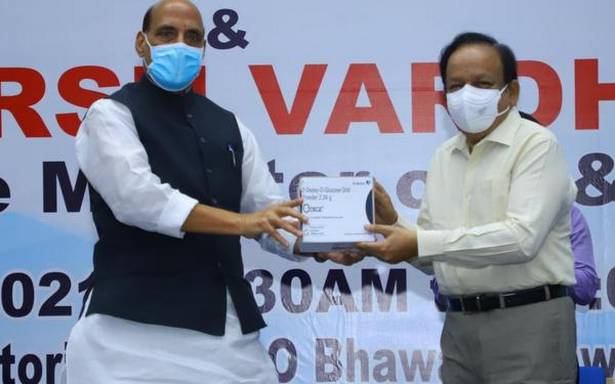 Developed with DRL, it reduces oxygen-dependence in patients

The first batch of the adjunct COVID therapy drug, 2-deoxy-D-glucose (2-DG) — developed by the Defence Research and Development Organisation (DRDO) along with Dr Reddy’s Laboratories (DRL), Hyderabad — was on Monday released for emergency use. Defence Minister Rajnath Singh formally handed over the drug to Health Minister Dr Harsh Vardhan.

“One box each of the sachets of the drug were handed over to Dr. Randeep Guleria, Director All India Institute of Medical Sciences (AIIMS) and Lt. Gen. Sunil Kant of Armed Forces Medical Services (AFMS). More will be handed over to different hospitals across the country for emergency use,” a Defence Ministry statement said.

An anti-COVID-19 therapeutic application of the drug 2-DG has been developed by Institute of Nuclear Medicine and Allied Sciences (INMAS), a DRDO lab along with DRL.

DRL will increase the production of the drug which is expected to be made available to all hospitals by the first week of June, said K. Satish Reddy, Chairman DRL.

The drug is a good example of DRDO and private partnership, which will help patients in overcoming oxygen dependency by around 40%, Mr. Singh said, speaking at the event. Dr. Harsh Vardhan said 2-DG was the first therapeutic drug for COVID which India has developed indigenously.

“Scientists have been working on the molecule for long and over the last one year clinical trials were conducted extensively in various hospitals across the country,” said Dr. G. Satheesh Reddy, Chairman DRDO.

On May 1, the Drugs Controller General of India (DCGI) granted permission for emergency use of this drug as adjunct therapy in moderate to severe COVID-19 patients, the DRDO announced last week.