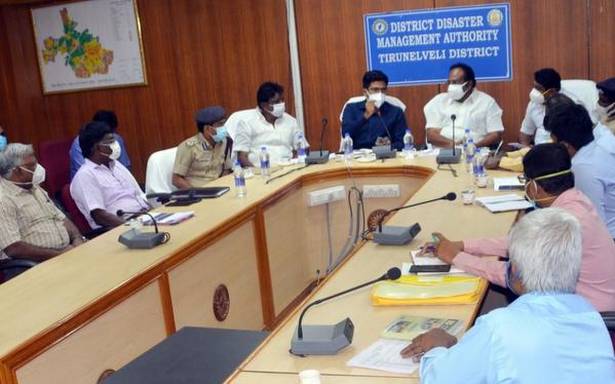 The technical snag in the plant’s ‘Cold Box’ had been rectified and the preliminary steps for heating-up of the plant had already started, Minister for Industries Thangam Thennarasu said

Speaking to reporters in Tirunelveli on Monday Mr. Thennarasu, said at a meeting chaired by him at the Collectorate, a review was undertaken on the number of patients undergoing treatment in the hospitals including at Tirunelveli Medical College Hospital; the oxygen requirement to treat the badly infected COVID-19 positive patients; the influx of new patients; allied facilities etc.

The ‘Oxygen Express Train’ of Indian Railways with five tankers had reached Thoothukudi from Rourkela on Monday evening and the tankers had been sent to various medical college hospitals based on their demand.

Meanwhile, the technical snag in the Sterlite Copper’s oxygen plant’s ‘Cold Box’ had been rectified and the preliminary steps for heating-up of the plant had already started. “Hence, the plant will start generating oxygen shortly,” Mr. Thennarasu said.

After a technical glitch crippled oxygen generation in the plant on last Thursday night, experts from the Indian Space Research Organisation’s Propulsion Research Complex (IPRC) arrived at the plant on request from the Thoothukudi District Collector K. Senthil Raj to help the technicians of the copper major. As the technical issues in the cold box and the checking of allied units had been completed, the plant is ready for oxygen generation.

The Minister, who hoped that the COVID-19 infection curve of the district would come down soon, said the steps being taken by the district administration by involving all stakeholders would yield desired results in the days to come.