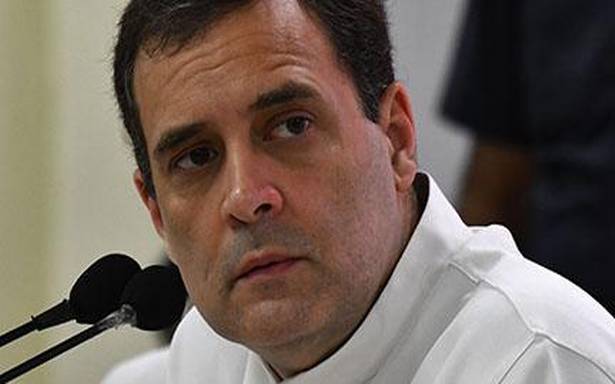 Condemning the incidents of violence in Jammu and Kashmir, former Congress president Rahul Gandhi on Thursday said terrorism had not stopped because of the removal of Article 370 or demonetisation.

In a tweet, soon after two government teachers (a Sikh and a Pandit) were shot dead by militants in the Eidgah area of Srinagar, Mr. Gandhi charged the Union Government with failing to provide security to the people of Jammu and Kashmir.

“Incidents of violence are increasing in Kashmir. Terrorism has neither stopped due to demonetisation nor after the removal of Article 370. The Central Government has completely failed to provide security,” Mr. Gandhi said in a tweet.

“We strongly condemn the attacks on our Kashmiri brothers and sisters,” he added .

The killing of the teachers took the number of civilians shot dead in the last five days in the Kashmir Valley to seven, including four from the minorities.

On Tuesday, the Kashmir Valley witnessed three targeted civilian killings in 90 minutes, which included a prominent Kashmiri Pandit businessman Makhan Lal Bindroo, who owned a well-known pharmacy in Srinagar, and a golgappa and bhelpuri seller from Bihar.

“The Modi government garners votes by promising to protect the Kashmiri Pandits, but has failed to provide them security. When will the pseudo-nationalist BJP government be able to control Pakistan-backed extremism?” asked Congress chief spokesperson Randeep Surjewala.