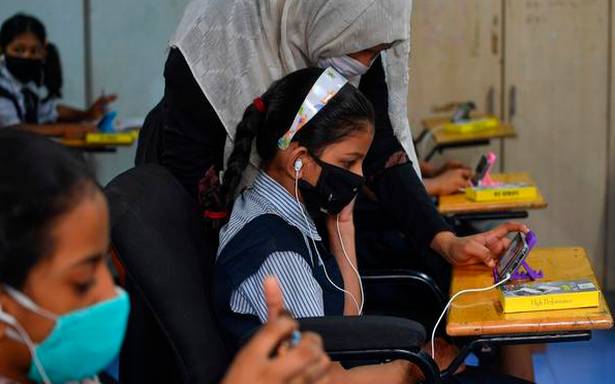 Bench says disparity exposed by online classes has been heart-rending

The digital divide caused by online classes will defeat the fundamental right of every poor child to study in mainstream schools, the Supreme Court warned on Friday.

The court rued how the right to education of little children now hinges on who can afford “gadgets” for online classes and who cannot.

Little children whose parents are too poor to afford laptops, tablets or an “optimum” Internet package at home for online classes during the pandemic have dropped out of school and even run the danger of being drawn into child labour or worse, child trafficking, the court said.

“During the course of the pandemic, as schools increasingly turned to online education to avoid exposure to the young children to the pandemic, the digital divide produced stark consequences… Children belonging to the Economically Weaker Sections [EWS]/Disadvantaged Groups [DG] had to suffer the consequence of not having to fully pursue their education or worse still drop out because of the lack of access to Internet and computer,” a three-judge Bench of Justices D.Y. Chandrachud, Vikram Nath and B.V. Nagarathna noted in an order.

Justice Chandrachud said the disparity exposed by online classes had been heart-rending.

“I have seen this from personal quarters… On one hand, the EWS child is going to a good school and on the other hand there is such a lot of disparity. How can a poor child whose mother is a housemaid and the father a driver afford a laptop or a tablet… These children need them to study. The daily homework is uploaded on the laptop, the school sends videos… Learning is taking place online,” Justice Chandrachud said.

The court said even though schools are now reopening gradually due to the receding curve of the pandemic, the “need to provide adequate computer-based equipment together with access to online facilities for children is of utmost importance”.

Justice Chandrachud said there may even be a delay in the reopening of schools for very young children.

“The needs of young children who represent the future of the nation cannot simply be ignored in this manner. A solution has to be devised at all levels of the Government, State and Centre, to ensure that adequate facilities are made available to children across social strata so that access to education is not denied to those who lack resources. Otherwise the whole purpose of the Right to Education Act, enabling the merging of EWS students with the mainstream students even in unaided schools will stand defeated,” the Supreme Court noted.

The court held that Article 21A (the right to free and compulsory education for children aged between six and 14) has to be a reality.

“The need for underprivileged children to access online education cannot be denied,” the Supreme Court underscored in the order.

The court was hearing a petition filed by private school managements challenging a Delhi High Court order of September 2020, directing them to provide their 25% quota EWS/DG students online facilities free of cost. The High Court had said the schools could get themselves reimbursed from the government.

The Delhi government had earlier appealed to the Supreme Court against the High Court order, saying it had no resources to reimburse the schools for the online gadgets.

Though the Supreme Court had stayed the High Court order in February 2021, the Bench led by Justice Chandrachud said both the Centre and States like Delhi could not bow out of their responsibilities towards young children.

The Bench asked the Delhi Government to come out with a plan to effectuate the ‘salutary object’ upheld in the High Court decision. The court said the Centre should join in the consultations.

“The issues raised in the present proceedings will not only cover the unaided schools, but also government and aided schools,” the court noted.

The Bench issued notice in the private schools’ managements’ petition and ordered it to be tagged with the pending Delhi Government petition.