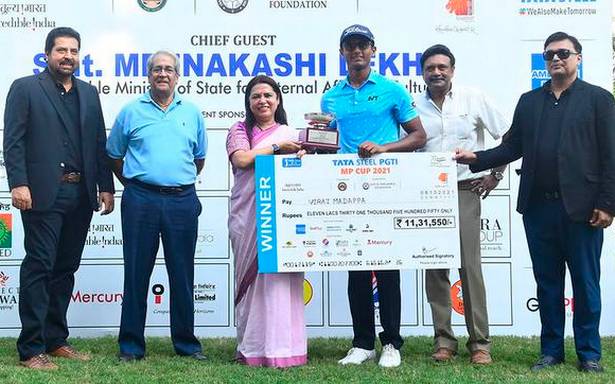 Holds his nerve to carve out a memorable one-stroke victory

When it mattered, Viraj Madappa held his nerve and holed the birdie-putt to carve out a memorable one-stroke victory over fellow overnight leader and practice-partner Khalin Joshi in the ₹70-lakh Tata Steel PGTI MP Cup golf tournament at the Delhi Golf Club course here on Friday.

The thrilling win was worth ₹11,31,550 for Madappa who moved to the third place on the Order of Merit, behind leader Karandeep Kochar and S. Chikkarangappa.

Joshi, who started the day with an ‘eagle’ and led for the better part of the final round, received ₹7,81,550.

Rashid Khan, playing a group ahead of the final group, shared the lead with Khalin at 14-under after the latter’s bogey on the 14th hole.

Soon thereafter, Rashid dropped his first stroke of the day on the 15th followed by a double-bogey on the final hole and eventually took the third place that fetched him ₹4,38,550.

For the second successive round, Madappa stole Joshi’s thunder. After Joshi broke away with an ‘eagle’ on the 515-yard par-5 opening hole and found pars on the rest of the holes on the front nine, he was wary of Rashid’s birdie blitz. All this while, Madappa had two bogeys and two birdies on the first nine.

The drama unfold on the back nine, leader Joshi (-15) and Madappa (-13) birdied the 10th hole. Then came Joshi’s first bogey, on the 13th and Madappa’s par closed the gap between them. The turning point proved to the par-5 14th hole where the lead changed hands as Madappa’s birdie coincided with Joshi’s second successive bogey. In fact, both hit the bushes but Madappa was lucky to get a free-drop since his stance was on the cart-path.

On the last two holes, Madappa and Joshi found a bogey and a birdie that meant the title was decided without a playoff.