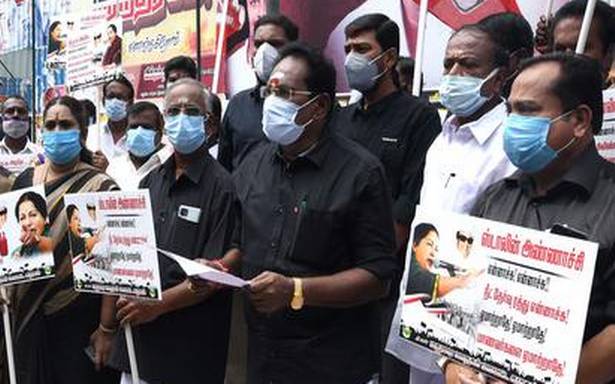 He handed over a petition to the Corporation Commissioner.

Former Minister and AIADMK MLA, Sellur K. Raju, on Wednesday, September 29, 2021, appealed to Madurai Corporation Commissioner, K.P. Karthikeyan, to expedite the works of relaying roads on arterial roads and important junctions to make them motorable ahead of northeast monsoon.

Later talking to reporters, he said that many important roads, streets and junctions had roads with lot of potholes posing danger to the road users. These roads are bound to become worse with the monsoon rains.

“The AIADMK government had floated tenders for relaying roads in the city. However, the DMK on coming to power have cancelled them,” Mr. Raju said.

He said that the DMK government should now call for fresh tenders and expedite the road re-laying work. Similarly, he complained about sewage from underground drainage mixing with drinking water in many parts of the city.

He claimed that the motors used for pumping the sewage have lost their utility with the increasing quantum of sewage let into the system due to increased population. Such motors should be replaced with high-power motors to avoid mixing of sewage with drinking water.