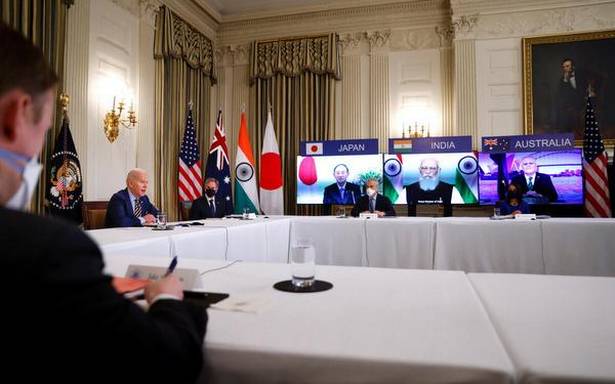 “We are united by our democratic values and our commitment to a free open and inclusive Indo-Pacific,” Prime Minister Narendra Modi said at the firt Quad summit on March 12. “Our agenda today, covering areas like vaccines, climate change and emerging technologies, makes Quad a force for global good,” he said adding that the Quad will be a pillar of stability in the region.

In his remarks, U.S. President Joe Biden announced the launch of a partnership to boost vaccine manufacturing. “The Quad is going to be a vital arena for cooperation in the Indo-Pacific,” he said.

In his opening remarks, Mr. Biden also described Quad as a new mechanism to enhance cooperation and raise mutual ambition as they address accelerating climate change. "We know our commitments… Our region is governed by international law, committed to all the universal values and free from coercion but I am optimistic about our prospect,” he said, in an apparent reference to China which is flexing its muscles in the region.

"The Quad is going to be a vital arena of cooperation in the Indo Pacific and I look forward to working closely with all of you in the coming years," Mr. Biden told Quad leaders as requested Mr. Modi to speak. "It’s great to see you," Mr. Biden told Mr. Modi.

Australian Prime Minister Scott Morrison said the summit brings a “new dawn in the Indo-Pacific”. He spoke of the need for upholding values, and international law, and to address the many challenges from COVID-19 to climate change.

Japanese Prime Minister Yoshihide Suga said, “I feel emotional about this summit. With the four countries working together to realise a free and open Indo-Pacific and to make strides in prosperity and stability in the region.”

Australian Prime Minister Scott Morrison and Japanese Prime Minister Yoshihide Suga are other leaders who are attending the virtual summit, which is the first conclave of the top leaders of the Quadrilateral alliance.

Known as the "Quadrilateral Security Dialogue,” representatives for the four member nations have met periodically since its establishment in 2007.

The four countries plan to establish a series of working groups that will focus on climate change; critical and emerging technologies, including working to set technology standards and norms and jointly developing some of the critical technologies of the future, officials said.