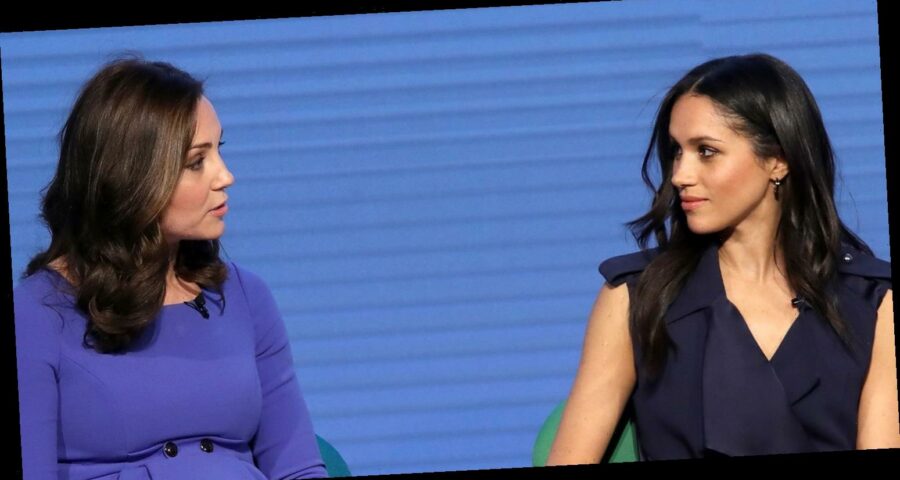 Not all royals are created equal? Meghan Markle’s alleged email to a palace aide about Duchess Kate and their rumored feud has been revealed after the former actress’ tell-all interview.

Everything We Know About Kate and Meghan’s Complex Relationship

The Suits alum, 39, told her side of the story regarding the rumor she made her sister-in-law cry before her wedding during her and Prince Harry’s CBS sit-down on Sunday, March 7.

The California native claimed “the reverse happened,” explaining that a few days before Meghan’s May 2018 nuptials, Kate, 39, “was upset about flower girl dresses and it made me cry.” Meghan noted that the Duchess of Cambridge apologized and “brought me flowers and a note” saying she was sorry but claimed the palace did not defend her in the press when contradictory stories about the incident made headlines.

Harper’s Bazaar revealed on Wednesday, March 10, an email linked to the crying incident that Meghan alledgedly sent in January 2020.

According to the outlet, Kensington Palace requested that Harry, 36, sign a statement against an “offensive” report about his brother, Prince William, which claimed the Duke of Cambridge, 38, “constantly bullied” Harry and Meghan before they announced their royal step back.

“Well, if we’re just throwing any statement out there now, then perhaps KP can finally set the record straight about me [not making Kate cry],” Meghan allegedly emailed an aide in response. Meghan’s suggestion was ignored, and she was allegedly told that Kate wouldn’t comment on idle gossip, the outlet reported on Wednesday.

Every Revelation From Meghan and Harry’s Interview

During the couple’s bombshell interview on Sunday, Meghan also revealed how the negative comments published about her in the U.K. tabloids were very different than the stories slamming Kate.

“If members of his family say, ‘Well, this is what happened to all of us’ or if they can compare what the experience that I went through was similar to what has been shared with us — Kate was called ‘Waity Katie’ waiting to marry William,” the former Tig blogger said in a bonus clip that aired on Monday, March 8, on CBS This Morning. “While I imagine that was really hard, and I do, I can’t picture what that felt like. This is not the same.”

She continued: “Rude and racist are not the same. And equally, you’ve also had a press team that goes on the record to defend you, especially when they know some things are not true. And that didn’t happen for us.”

Buckingham Palace reacted to the duo’s shocking revelations in a statement on Tuesday, March 9, saying, the “whole family is saddened” by what they heard and noted that the “concerning” claims of racism “are taken very seriously and will be addressed by the family privately.”

A source exclusively told Us on Tuesday that William, 38, and Kate were in “total shock” after hearing what the duo said, especially the topic of Meghan’s past suicidal thoughts and claims that someone in the royal family spoke about Archie’s skin color.

A second source added, “Kate is caught between a rock and hard place. She wants to speak up and help the crown rebuild their image, but she is not one for confrontation nor escalation.” The insider added that Kate “feels that there was a misunderstanding” about the bridesmaid dress debacle.

The following day, William told Sky News that he hasn’t spoken to his brother yet, “but I will,” insisting, “We’re very much not a racist family” despite claims from Harry and Meghan.

Kate, for her part, hasn’t spoken to Meghan “directly in over a year,” a source exclusively told Us on Wednesday. “They were never that close,” the insider added. “The reason they’re not speaking is because of the rift between Prince Harry and Prince William.”