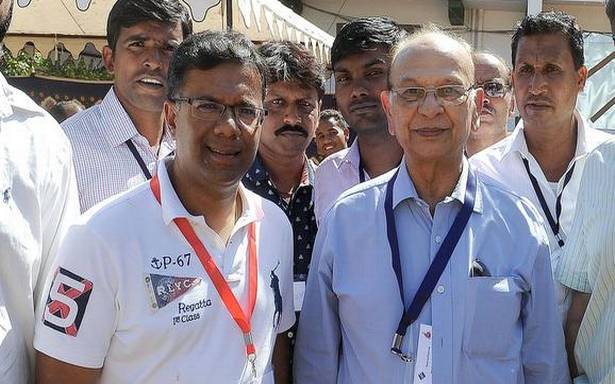 The renomination of former Goa Chief Minister and 11-time MLA Pratapsingh Rane by the Congress for the Poriem Assembly constituency has set the stage for a fraught “father versus son” contest in the upcoming Assembly election.

The octogenarian Mr. Rane, who has been the coastal State’s longest serving Chief Minister — holding the post no less than six times for different periods between 1980 and 2007 — has been challenged by his son, Bharatiya Janata Party (BJP) leader Vishwajit Rane, who is State’s Health Minister and the MLA from neighbouring Valpoi constituency, less than 20 km from Poriem.

“I am a sitting member [from the Poriem seat in North Goa] and have been working for the people all these years…A lot more needs to be done, more jobs need to be generated, industry has become stagnant, mining is closed and unemployment has risen sharply during the BJP government’s tenure,” said the 82-year-old Mr. Rane.

Earlier, when his name did not figure in the first list of eight candidates, speculation was rife that he was unwilling to contest this time around. This was put to rest by the Congress central election committee’s announcement on Wednesday evening.

The Congress’ official decision to field the stalwart came a day after Mr. Viswajit Rane had brusquely exhorted his father to “gracefully retire” from the political arena while claiming that he had lost connect with the younger voters.

“I have been managing the Poriem constituency for the last 20 years…he is my father and my idol. But when he talks about promoting the younger generation in the Congress, 82 is not an age to promote oneself…he should retire gracefully,” said Viswajit Rane.

The younger Rane expressed confidence of winning Poriem by a margin of at least 10,000 votes — a significant number given the small electorate sizes of Goa’s Assembly seats.

Asked whether it would be a son versus father battle, he tersely replied: “It will be a fight between who is more competent and who is less so.” He said his father may have taken the decision to contest owing to pressure from the central Congress leadership and the Goa Congress.

Poriem and Valpoi form part of the verdant Sattari sub-district, the virtual fiefdom of the Rane clan and where Mr. Pratapsingh Rane still retains an overwhelming influence today, having won every Assembly election since 1972.

The younger Rane was initially with the Congress and represented Valpoi since 2007, he joined the BJP after the 2017 Assembly election.

Since then, the BJP has steadily exerted its influence under his leadership in Valpoi and Poriem.

While the Congress has been steadily losing ground in Goa, it nearly imploded in 2019 when 10 of its 15 MLAs joined the BJP.

This process is continuing ahead of the 2022 Assembly election with Aleixo Lourenco, party’s Curtorim MLA and State working president, defecting to the Trinamool Congress leaving the Congress with just two MLAs currently — the elder Mr. Rane and Digambar Kamat, also a former Chief Minister.

The BJP had been making strenuous efforts to woo the senior Mr. Rane with State in-charge Devendra Fadnavis visiting his residence in September.