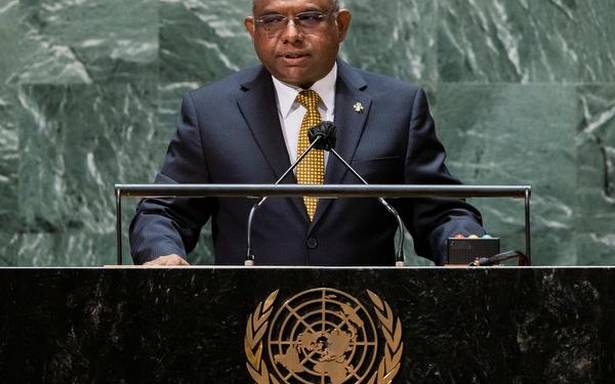 President of the United Nations General Assembly Abdulla Shahid on Thursday said that he has tested positive for the COVID-19 and is isolating at home with mild symptoms.

The 59-year-old Maldivian Minister of Foreign Affairs is fully vaccinated along with a booster jab.

“I have tested positive for COVID19 today. I am isolating at home with mild symptoms. I was privileged to have been fully vaccinated including a booster. My prayers are with the millions suffering from Covid and the billions without access to vaccine! I Stand for #VaccineEquity,” Mr. Shahid, the President of the 76th session of the UN General Assembly, said on Twitter.

In June, he was overwhelmingly elected as the President of the United Nations General Assembly, garnering 143 votes out of the 191 ballots cast.

He presided over the 76th session of the UNGA in September.

After his election, Mr. Shahid had said that his “immediate priority” will be recovery from the COVID-19 pandemic and working to ensure “vaccine equity” to restore hope from a year characterised by “disease, despair and devastation.” Mr. Shahid had succeeded Turkish diplomat Volkan Bozkir who was UNGA President for the 75th session that came amid the unprecedented COVID-19 pandemic.