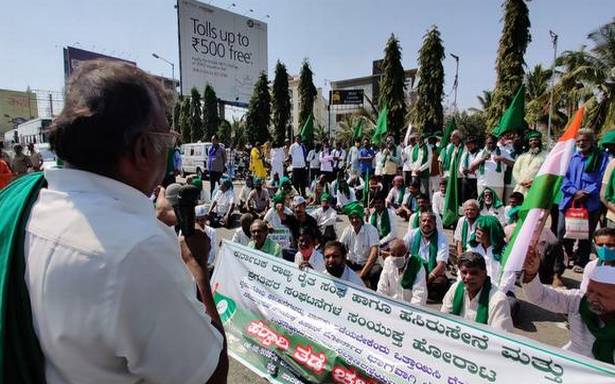 Farmers and members of Kannada organisations tried blocking roads at two points in the city, near Yelahanka and Mysore Bank Circle, on Saturday afternoon as part of the nationwide “chakka jam” protest called by Samyukta Kisan Morcha against farm laws.

However, they were detained by the city police minutes after they started blocking roads.

Farmer leader Kuruburu Shanthakumar, who led the protest at Yelahanka, said policemen detained three groups of farmers who tried to block roads one after another. “Our only demand is that the Union government must withdraw the three farm laws. But today’s protest is also against how the Union government is treating farmers, booking false cases and using brute force of the police against them,” he said.

Kannada activist Vatal Nagaraj, who led the road block at Mysore Bank Circle, described the Narendra Modi regime as “pro-corporate and authoritarian” and said the people have been ‘awakened’ and the movement against “anti-farmer” laws would not rest till the laws are withdrawn. He also came down heavily on Chief Minister B.S. Yediyurappa for “blindly following the diktat of the Centre” and also bringing amendments to land reforms in the State. He led a “guddali chaluvali” trying to dig up roads to protest the extensive barricading of Delhi’s borders. However, policemen did not allow this and detained Kannada activists and farmers.