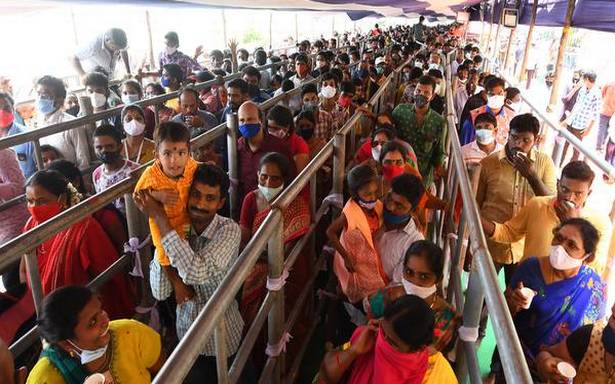 Thousands of devotees thronged the Sri Durga Malleswara Swamyvarla Devasthanam to have darshan of Goddess Kanaka Durga adorned as ‘Sri Lalitha Tripura Sundari Devi’ on the fourth second day of the Dasara Utsavams atop Indrakeeladri here on Sunday.

More than one lakh devotees had darshan of the deity, and long queues were seen from Vinayaka temple since dawn.

Due to closure of the Krishna river ghats, devotees had bath under arranged showers. The were seen offering hair at the Kalyanakatta.

The temple was illuminated for the Navarathri Utsavams. It reverberated with the chants of ‘Jai Durga, Vijaya Durga, Kanaka Durga’.

The temple officials organised ‘kolatam’ and other cultural events.

The Endowments, Revenue, Vijayawada Municipal Corporation (VMC), and other departments made arrangements for the devotees visiting the temple.

Many devotees from the neighbouring Telangana, Tamil Nadu, Karnataka and Puducherry had darshan of the Goddess.

Information counters had been arranged at the Pandit Nehru Bus Station (PNBS), railway station, Durga temple and other points for the convenience of the devotees visiting Indrakeeladri from far off places.

District Medical and Health Officer M. Suhasini said medical camps had been arranged. A temporary hospital had also been set up. Ambulances were kept ready to shift patients in emergency.

“COVID-19 tests are being conducted and results given immediately. Treatment is being given for the patients who have symptoms of the virus,” she said.

Masks and sanitizers were made available in the medical camps. ASHA workers, ANMs, medical officers, nurses and paramedical staff were deployed at the temple round the clock, Dr. Suhasini said.