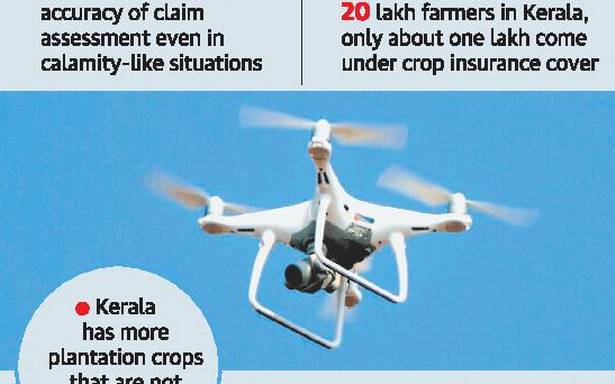 A senior official of the Agriculture Insurance Company said that one of the goals of the company was to speed up settlement of insurance claims by farmers and the company was exploring new technology, including deployment of drones, coupled with conventional claim assessment methods for speedy settlements.

This would also enhance the accuracy of granular level claim assessment even in calamity-like situations where human intervention may not be possible.

The official also said a scheme for cardamom would be launched shortly in association with the Spices Board. Likewise, a scheme was being devised for rubber plantations in consultation with the Rubber Board. The public sector crop insurance company was waiting for Rubber Board’s confirmation for the implementation of the scheme.

“Technology integration in crop insurance is promoted strongly by the Union government and it is of great significance for the success of crop insurance,” the official added. There are around 5.5 crore farmers who have taken crop insurance cover across the country, and around 3 crore of these farmers are served by AIC.