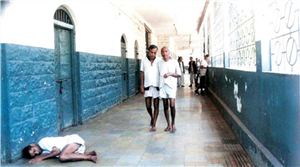 The direction came from a bench of Justices D Y Chandrachud and M R Shah while hearing a PIL pertaining to rehabilitation of the mentally ill languishing in hospitals or mental asylums. THE SUPREME Court on Tuesday directed the Maharashtra government to ensure that the practice of sending those who are institutionalised in mental health establishments to beggar homes or custodial institutions be discontinued, saying the practice is contrary to provisions of Mental Healthcare Act, 2017.

The direction came from a bench of Justices D Y Chandrachud and M R Shah while hearing a PIL pertaining to rehabilitation of the mentally ill languishing in hospitals or mental asylums.

In December 2019, the Maharashtra government had shifted 190 mentally ill patients to old age homes, women shelter homes and beggars homes to comply with a Supreme Court directive to rehabilitate them in society. The patients, mostly long-term inmates, were admitted for treatment in four mental hospitals and had no family to return to.

While taking the decision to shift these patients to beggars and shelter homes, the state Social Justice Department had said the move was temporary and announced it will set up half-way homes and move them there eventually. But not a single such home has been set up yet.

In his plea to the Supreme Court, petitioner Gaurav Kumar Bansal said the Maharashtra government had committed a blunder by transferring these people with mental illnesses to beggar homes. At least three persons among them died because of the transfer, Bansal submitted in the court.

Taking note, the bench said, “Such an approach by the state government would be contrary to the provisions of the Mental Healthcare Act, 2017.”

Appearing for the state, Advocate Sachin Patel sought time to take instructions. Allowing the request, the bench said, “While the standing counsel may do so, we are categorically of the view that any such action to shift such persons to ‘beggar homes’/custodial institutions would be counter productive and contrary to the letter and spirit of the Mental Healthcare Act 2017.”

“We accordingly direct the state of Maharashtra to look into this aspect immediately and ensure that this practice is discontinued,” it said.

The court also said that it is “of the view that the progress in implementing the judgment of this court and the Mental Healthcare Act 2017 has been tardy and it is time that the matter is taken up with utmost alacrity by the Union Government”.

It noted that when the matter was last listed before the court on February 10, 2020, before the onset of the Covid-19 pandemic, it was recorded that the status report of the Centre indicates certain discrepancies between the data submitted by the states/UTs and the data with the Task Force. A meeting was convened on February 24, 2020 to carry out the reconciliation and the court was to be apprised of the progress through a status report but this did not happen.

Appearing for the Centre, Additional Solicitor General Madhavi Diwan said due to the pandemic, no progress could effectively be made and that the Ministry of Social Justice and Empowerment had on July 5 written to all states and UTs for a meeting on July 12.

Taking note, the court directed all states and UTs through the chief secretaries to ensure that due representation is made at the July 12 meeting and that a status report be filed at least one week before the matter is heard next on July 27.

Give priority to Covid tests, vaccination in mental health homes: SC to Centre

The Supreme Court on Tuesday directed the Centre to ensure that people lodged in mental health institutions are tested for Covid and vaccinated at the earliest. “The issue of testing, tracing and vaccinating those suffering from mental illness must be taken up on a priority,” said the bench of Justices D Y Chandrachud and M R Shah. “The Department of Social Justice shall take it up immediately with the Ministry of Health and Family Welfare so that suitable instructions are given and a plan is chalked out for all the states/UTs for ensuring the vaccination of persons who are institutionalised in mental health establishments.”