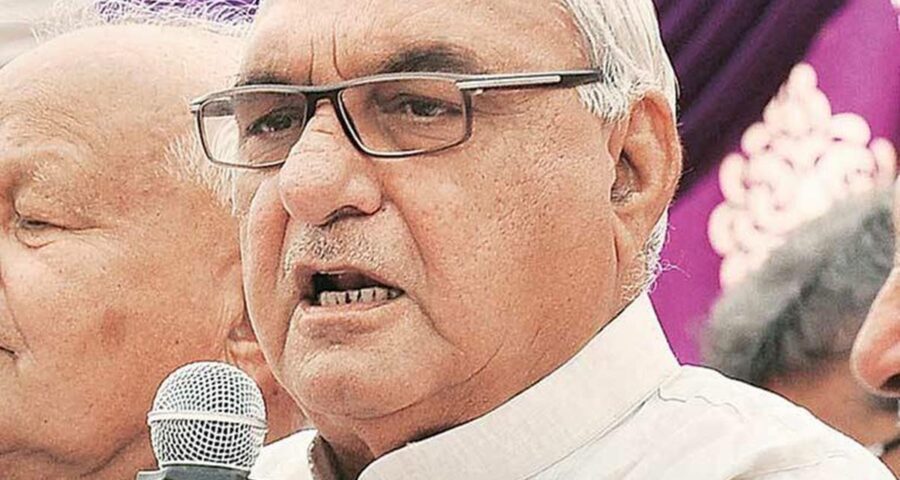 One group of MLAs also met senior party leader K C Venugopal in Delhi while AICC in-charge for Haryana affairs Vivek Bansal, in an attempt to take the former CM on board in the appointments for party organisation in the state, met Hooda and his son and Rajya Sabha MP Deepender Singh Hooda. One group of MLAs also met senior party leader K C Venugopal in Delhi while AICC in-charge for Haryana affairs Vivek Bansal, in an attempt to take the former CM on board in the appointments for party organisation in the state, met Hooda and his son and Rajya Sabha MP Deepender Singh Hooda.

A group of 22 MLAs had reached Hooda’s Delhi residence Monday. Ten of them had met Venugopal in two batches. On Tuesday, six MLAs met him. Those who met Venugopal include Geeta Bhukkal, Shakuntla Khatak, Jaibir Valmiki and Balbir Valmiki, who are from the Scheduled Castes, and Rao Dan Singh and Maman Khan.

“We want due weightage to Hooda in the formation of Pradesh Congress Committee (PCC) and the committees at district level apart from consultation with the MLAs in the process. We are hopeful that our voice will be heard now,” an MLA, who was part of the consultations, told The Indian Express.

Regarding Bansal meeting Hooda, party sources said the leaders held a long discussion over lunch. A number of party legislators were also present at Hooda’s residence and sources said, Bansal also met some of them separately.

Congress MLA Geeta Bhukkal, told reporters in Delhi that people are fed up with alleged misrule of the BJP-JJP government in Haryana and are looking at the Congress with great hope. “We want that Sonia Gandhi ji, Rahul Gandhi ji to give us time (an appointment) so that we can strengthen Congress in Haryana. For that we are meeting the top leadership of the party.”

Bhukkal denied any infighting in the party but insisted that “the expansion of an organisation is an important issue” “All of us aim to strengthen the Congress. Haryana people are watching towards Congress with a lot of hopes as they are upset with the BJP-JJP combine,” she added.

The meetings come after a group of MLAs sought a “strong leadership” for the party in the state when they met Bansal in the national capital last week. The meetings indicate rumblings in the Haryana Congress, at a time when the party’s top leadership is dealing with factionalism in neighbouring Punjab.

Hooda is the Leader of Opposition in the Haryana Assembly while Kumari Selja is the state Congress president. Of the 31 legislators that the Congress has in Haryana, nearly two dozen are considered Hooda loyalists.

A leader close to Selja said that “in reality Hooda faction wants replacement of current state president (Selja) with an objective of monopoly over the party affairs in the state.” “The MLAs were already being consulted for the formation of organisational committees. Inputs were also sought from Hooda for the same. Selja has always tried to have cordial relations with all party legislators. She even hosted dinner or lunch too for them,” the party leader said.

Notably, Hooda and Selja were in the same camp when they were up in arms against Bhajan Lal in the internal politics of Congress. Even during the 2019 Lok Sabha elections, Hooda and Selja had joined hands. That time, Hooda had gone to Ambala at the time of nomination of Kumari Selja while she had gone to Rohtak when Deepender had filed his nomination for the parliamentary polls. Sources say differences had developed between Hooda and Selja last year when the former CM succeeded to get a party ticket for Deepender for the Rajya Sabha seat at a time wneh Selja was seeking re-election to the Upper House.