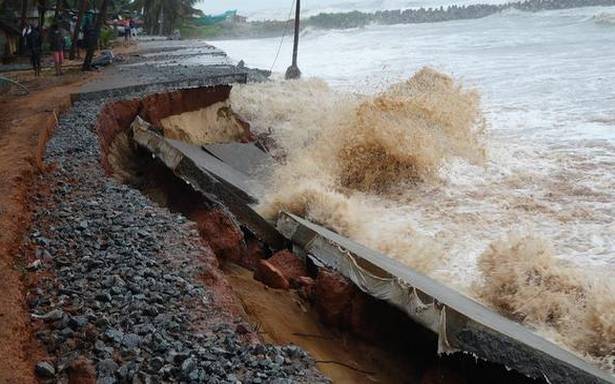 The IMD on Saturday night said the cyclonic storm Tauktae, the first to hit the Indian Coast this year, has intensified into a "severe cyclonic storm" and is heading towards the coast of Gujarat and the Union Territory of Daman and Diu and Dadra and Nagar Haveli.

The cyclone is also expected to hit many areas in States like Kerala, Karnataka, Goa and Maharashtra while passing due to heavy rainfall.

The IMD had said the storm is likely to pass the Mumbai coast late on Saturday or early Sunday from a distance, so minimal damage is expected. It will, however, cause gusty winds and heavy rain in a few places in Mumbai, Thane and Palghar.

Kerala is likely to receive isolated heavy to very heavy rainfall on May 16, even as Tauktae, which has intensified into a Very Severe Cyclonic Storm, has moved further north in the Arabian Sea.

Many places in the State are likely to receive light to moderate rainfall.

The Brihanmumbai Municipal Corporation shifted 580 patients from Covid care centres in the city as a precautionary measure after India Meteorological Department warned that Cyclone Tauktae is likely to pass close to the city, a BMC official said on Sunday.

The BMC on Saturday night shifted 580 patients from BKC (243), Dahisar (183) and Mulund (154) jumbo Covid care facilities to state and civic-run hospitals in Mumbai, the official said.

Officials are also contemplating a possible shut down of the Bandra-Worli Sea Link as a precautionary measure because of IMD’s announcement that the cyclone may pass close to the city on Sunday.

The BMC had on Friday alerted city hospitals to avoid last-minute confusion over beds and availability of oxygen devices.

Suburban rail services in Mumbai will operate on Sunday, the official said. – PTI

The Department of Telecom on Saturday held a review meeting with telecom infrastructure providers to take stock of readiness to mitigate the impact of cyclone Tauktae, industry body Taipa said.

"In order to ensure uninterrupted telecom connectivity in these States Maharashtra, Mumbai and Gujarat, the Department of Telecommunications held a meeting with all the telecom infrastructure providers and their representative body Tower & Infrastructure Providers Association (TAIPA)," the industry body said in a statement.

The meeting was chaired by telecom secretary Anshu Prakash and was also attended by the telecom operators along with various senior DoT officials including DG Telecom TK Paul and other officials from State offices, the statement said.

"All our IPs (infrastructure providers) members have taken necessary steps to ensure uninterrupted connectivity in these areas which are likely to be affected by the cyclonic storm and all the background arrangements like additional DG sets, battery banks, spare parts, stocking of diesel are taken care of," TR Dua, Director-General, Tower & Infrastructure Providers Association said.

He said IPs have also deployed additional restoration teams which are kept on standby mode for all major districts and areas likely to get impacted. – PTI

In Kerala, Pazhassi dam to be opened partially

As heavy rains continue to pour in the region, the Kannur district administration has decided to open the Pazhassi Dam partially by Sunday afternoon.

District Collector T.V. Subhash said that currently, the water level in Pazhassi Dam has reached 24.55 m. The shutters of the dam will be partially opened at 12 noon on Sunday for safety reasons as heavy rains continue in the catchment areas of the dam at 10 cm per hour.

Meanwhile, heavy winds and rains caused severe damage in the district. As many 21 houses were partially destroyed and one well was completely destroyed.

The Disaster Management Authority on Sunday shifted around 300 persons from the Azhithala-Kuriyadi stretch of the Kozhikode coastline after a four-kilometre long sea wall  collapsed in the area following sea erosion.

Officials said the strongly-built granite wall was found caved in, posing a serious threat to nearly 100 houses in the coastal area near Vadakara. Many of these houses were damaged by rough waves, they said.

The coastline turned into a garbage dump with huge pile of plastic wastes washed ashore after the collapse of the protective wall. As a safety measure, many nearby residents were also asked to relocate to safer locations, the officials said.