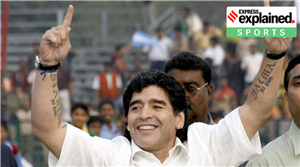 According to Julio Chiappetta, an Argentine journalist close to Maradona, the footballer’s total earnings through his career were in the ballpark of $500 million but his true net worth was somewhere close to $75-100 million. Events after Diego Armando Maradona’s death continue to mirror his life with a battle emerging across partitioned lines on the division of his wealth, assets and memorabilia among his many, many family members.

Conspiracies regarding his death, the new Amazon Prime drama named Sueño Bendito (Blessed Dream) and the daily reality television that Argentina has been lapping up between the warring factions chasing Maradona’s wealth or whatever is left of it, has now reached cruising altitude.

What is the valuation of the assets Maradona has left behind?

According to Julio Chiappetta, an Argentine journalist close to Maradona, the footballer’s total earnings through his career were in the ballpark of $500 million but his true net worth was somewhere close to $75-100 million.

Other media outlets like Goal.com peg Maradona’s net worth at $100,000, citing the enormous tax bill that Italian authorities revealed has been accumulating since his time in Napoli. Maradona publicly refused to ever pay those taxes back, the figure of which was $42 million, according to the same Goal article.

Did Maradona have a will?

Maradona left no will or declaration of how his assets were meant to be divided in the event of his death. In Argentina, a person can only assign a third of their assets in a will. The rest is set to go to the next of kin and spouse. Since Maradona had no will and no current spouse – the assets should ideally be passed down to the children – which raises its own Pandora’s box.

How many children does Maradona have?

For years Maradona denied having any other children other than Dalma and Giannina, borne out of a marriage with his first wife Claudia Villafañe. But in later years, the number of acknowledged children has grown to five from four different women. Further that, his routine visits to Cuba weren’t just to meet his friend Fidel Castro, but according to the Times, also to ascertain the identity of as many as three more children.

According to the BBC, there are two more people who claim to be the children of Maradona. 19-year-old Argentine national Santiago Lara and 23-year-old Magali Gil are also trying to establish the 1986 World Cup winner as their father in order to claim a portion of his inheritance.

Who are the parties vying for his assets?

His daughters Dalma and Giannina, along with their mother, are on one side of the daily soap opera consuming Argentine television. They have hired a legal team that specialises in complex inheritance cases. On the other side is Maradona’s lawyer for the past seven years, Matias Morla – who has the support of some of Maradona’s recent girlfriends. Morla had set up the Argentine legend’s business under a company called Sattvica. That company was used to trademark terms such as ‘El Diego’ and ‘El 10’. “The girls don’t like me since we cut off their credit cards in June 2014. They fought because they stole from him,” Morla claimed in an interview with America TV. “I am the one who was with Maradona for seven new years and seven Christmases, looking at the phone and nobody called him.”

Morla also claimed in the same interview that Dalma named her daughter Roma as a way to insult Maradona and his Napoli roots. Both the daughters have denied the accusations but in April made a complaint about fraudulent administration which led to Morla’s office being raided.

The legal team hired by Dalma and Giannina also demanded a police investigation into Maradona’s death, particularly the care provided to him after an operation on his brain in the same month of his death.

What is the controversy regarding his death?

According to a report accessed by Reuters, investigations carried out on the death of Maradona state that the care provided to him was “inadequate, deficient and reckless”

“The action of the health team in charge of treating DAM (Diego Armando Maradona) was inadequate, deficient and reckless,” the report stated. “He presented unequivocal signs of a prolonged agonizing period, so we conclude that the patient was not properly monitored from 00:30 on 11/25/2020,” it added. The report is part of investigations against Maradona’s personal doctor Leopoldo Luque, 39 and his psychiatrist – among a team of other medical professionals.

Maradona died at the age of 60 from heart failure at his rented home on the outskirts of Buenos Aires in November last year. He had successful surgery on a brain blood clot that month itself.

After his death, his doctor defended himself and at one point in a press conference, said, “You want to know what I am responsible for? For having loved him, for having taken care of him, for having extended his life, for having improved it to the end.”