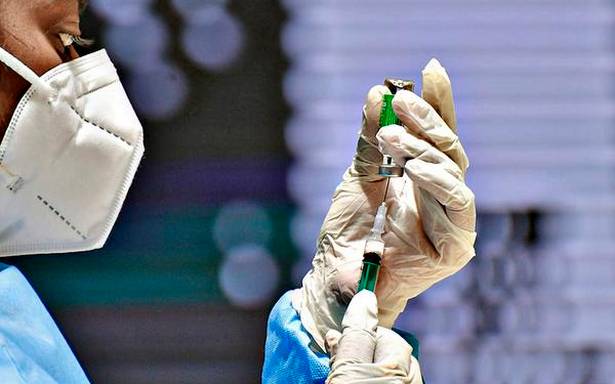 200 vaccinated people to be tested for robustness, longevity of antibodies

A study to assess the need for a booster dose of the COVID-19 vaccine is set to begin at Sri Jayadeva Institute of Cardiovascular Sciences in Bengaluru.

Institute Director C.N. Manjaunath told The Hindu that the 200 healthcare workers at the institute, who had received their second dose in February, would be tested for the robustness and longevity of anti-SARS-CoV-2 antibodies in September first week. “In the wake of all the discussion around a booster dose, we want to study how long the vaccine mediated antibody response will last,” he said.

This group, aged above 45 years (including 100 female health staff), will undergo the enzyme-linked immunosorbent assay or ELISA test that measures antibodies in blood.

“We had tested the same group in April, two months after they had taken the second dose and had found a good antibody response in 77.7% of them. Our September study will show if the good immune response gained after two months is sustaining or waning,” said Dr. Manjunath, who is also the nodal officer for labs and testing in the State’s COVID-19 task force.

“In this group, the antibody response was above 90% among those who had been infected and had taken the vaccine after recovery. There was some cell mediated immunity, which gives protection against the infection, in the remaining 22.3% too. My assessment is that the group that showed weak immune response may require a booster shot,” he said.

The employees had taken two doses of Covishield after an interval of four weeks as per the spacing rules then. “As many as 154 of them had developed good immunogenic responses. Now after the government revised the gap between two doses to 12-16 weeks, there should be no doubt about immunogenicity among the healthcare workers who took the second dose after four weeks. Our study will clear their doubts and also provide evidence on the requirement of a booster shot,” the doctor said.

“If the antibody response is poor after seven months, particularly among people with comorbidities and those above 60 years, they should receive a booster shot on priority,” Dr. Manjunath said. As many as 35 of the vaccinated group of 200 staffers got infected during the second wave. However, none except one required hospitalisation. The only person who was admitted also recovered without any complications. This indicated that vaccination helped prevent severe disease in the infected staffer, he pointed out.

Dr. Manjunath agreed there are some practical difficulties. The booster dose can be made available only after the vaccine supply is in surplus and after a majority of the population (70%-80%) has taken both the doses, he added.

Meanwhile, some experts emphasised the need to vaccinate all the vulnerable people with both the doses before booster shots.

In a tweet, Giridhara R. Babu, member of the State’s COVID-19 Technical Advisory Committee (TAC), who is also the head of Lifecourse Epidemiology at the Indian Institute of Public Health in Bengaluru, said, “More doses per person is not helpful. More people with adequate doses is what is needed for the world.”

“Irrespective of the number of (booster) doses planned in the developed world, no region is safe unless the rest of the world gets two doses,” he said in another tweet.