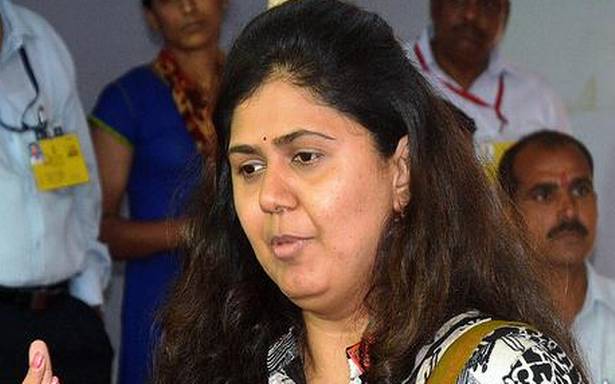 Ex-minister says her only leaders are Narendra Modi, Amit Shah and J.P. Nadda

Former Maharashtra Minister Pankaja Munde said she is not going to quit ‘home’, referring to the Bharatiya Janata Party (BJP), which her father worked hard to build.

Reports had emerged that she was upset after her sister and Lok Sabha MP Pritam Munde was denied a Cabinet berth. Taking an apparent dig at the State leadership, particularly Leader of Opposition Devendra Fadnavis, Ms. Munde said her only leaders are Prime Minister Narendra Modi, Union Home Minister Amit Shah and BJP president J.P. Nadda.

“Time changes for all and time is the only solution. But this is not the time to take any extreme decision. Why should we quit the home that we worked so hard to build?” she asked while addressing supporters in Mumbai. She said her father Gopinath Munde too suffered setbacks but decided to walk the path. The BJP chose Rajya Sabha MP Dr. Baghwat Karad, another OBC leader, as Minister of State.

Reacting to a slew of resignations from her supporters, Ms. Munde said that she would be rejecting the resignations. “I remember what party gives me, my workers remember what my party does not give me,” she said.

She visited Mr. Modi and Mr. Nadda on Monday in Delhi amid the reports. “Naddaji listened to me and he knows that you (workers) are not happy. But he expressed the hope that I will manage to pacify you. I am sure that you will listen to me,” she said. Ms. Munde, however, added that her sister was the rightful choice for the Union Cabinet. “I am 42 and he (Karad) is 64. How can I get upset over senior leader from my own community?” she asked.

Taking a dig at the State BJP leadership without naming anyone, Ms. Munde said that this was not the time for dharmayuddha. “When Pandavas battled with Kauravas, the former latter tried to avoid the war as they were on the right side. Today, I am doing the same.” she said, adding that even lieutenants of Kauravas were not with them emotionally.

Targetting Mr. Fadnavis, she said, “I never wanted to become CM, but people wished for it and I was pushed to the wall. Then what about those who openly say that they want to become Prime Minister?”