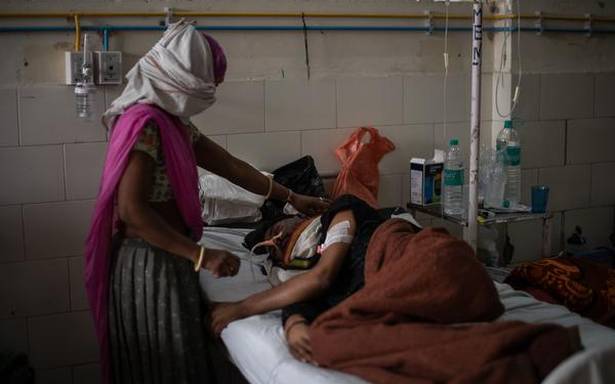 Several of them pertained to the treatment of mucormycosis

The private hospitals in Rajasthan have refunded money to the tune of ₹36 lakh unduly charged from the patients insured under the State government’s flagship health scheme, the Chief Minister’s Chiranjeevi Swasthya Bima Yojana, following an intervention by the Medical and Health Department. The universal health insurance scheme was launched here on May 1 this year.

The hospitals empanelled under the scheme have refunded the claim amount in 267 cases. Several of them pertained to the treatment of mucormycosis or black fungus, which had emerged as a major threat in the middle of the second wave and was subsequently added to the list of permitted procedures.

Health Assurance Agency chief executive officer Aruna Rajoria said here on Saturday more than 1.60 lakh people had already availed themselves of cashless treatment under the scheme. The complaints pertaining to the patients being unduly charged by the hospitals were being examined and refunds initiated, she said.

Over 1.30 crore families, comprising nearly 80% of the State’s population, have been registered as beneficiaries of the Yojana. However, several hospitals and even the beneficiaries were unaware of its provisions as it was introduced as the universal health insurance for the first time in the State.

Ms. Rajoria said the confusion had resulted in several of the insured patients being unduly charged by some hospitals, despite the scheme giving an annual cashless insurance cover of ₹5 lakh to every family. The flagship scheme has arrived as a major step ensuring social security for vulnerable sections during by offering treatment of all diseases, including the COVID-19 infection.

The Medical and Health Department has initiated several measures to avoid confusion in future and appointed consultants in the empanelled hospitals to assist the beneficiaries and guide them to choose the most appropriate treatment options. A round-the-clock call centre has also been established to address any issue regarding the health insurance.

The Yojana, formulated in accordance with Chief Minister Ashok Gehlot’s target for “Nirogi Rajasthan” (disease-free Rajasthan) is acclaimed as the most affordable health policy.

The beneficiaries are required to pay a premium as low as ₹850 per family, while registration is free for families included in the National Food Security Act, those covered in the Socio-Economic Caste Census-2011, beneficiaries of COVID-19 ex-gratia list, contractual workers and small and marginal farmers.