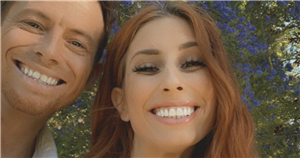 Joe Swash has admitted he and Stacey Solomon have got "no clue" what to name their unborn baby girl.

The little daughter will be a first for both of them, as they have two year old son Rex together. While Joe is also dad to son Harry, 14.

As the excited couple prepare to welcome their first daughter, Joe answered fans' questions about their unborn daughter and his relationship with Stacey on Instagram stories on Saturday 14 August.

Joe invited his 1.8million followers to send their questions in as he shared a photo of the family's daschund pup Peanut.

He wrote on top: "Morning Stace is away filming Rex is asleep and everyone including me is a bit miserable when she's not here", followed by a laughing face emoji.

He added: "So while I'm laying here bored I thought…" Joe then added a box for fans to ask their burning questions.

One follower asked: "Have you got a baby girls name? Xx".

Joe, who recently revealed Stacey's strange eating habits, went on: "We've just got no clue what to call her. But hopefully when she's here we will just know…" alongside a red heart emoji.

The dad then appealed to followers for inspiration as he ended his post with: "Any ideas let me know" before finishing it off with another red heart emoji.

Meanwhile, another fan asked for an update of the couple's wedding plans. They wrote: "Are you and stacey getting married before baby arrives ? X".

To which Joe explained: "I would marry her tomorrow. But we both wanted to wait until next year that way all the kids can be there.

"Couldn't not have our flower your there could we", followed by a crying emoji.

And she also started packing her hospital bag incase the little one wishes to make an early appearance like her big brother Rex.

As she filmed herself packing getting her unborn daughter's clothes washed and ready for the bag, Stacey explained to fans: "I know I have some time (8 weeks ish) to go but Rex came at 37 weeks and I was so unprepared and felt like I'd lost time so I don't want to wait til last minute this time."

For all the latest news on Stacey Solomon and Joe Swash, sign up to OK!'s daily newsletter here