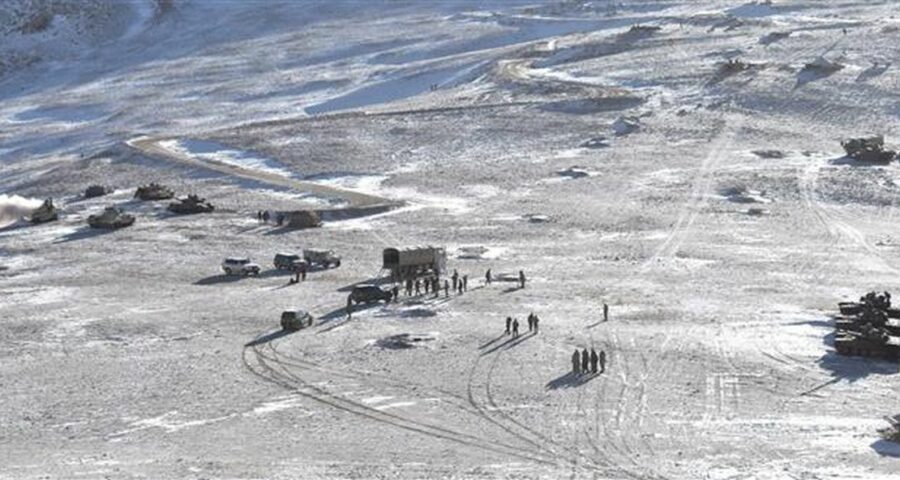 ‘The numbers of troops on both sides are enormous.’
‘They are about 50,000-60,000 soldiers facing each other in that sector — that’s about the total number of troops that both sides had in the 1962 War in all sectors.’

“We are focused on Ladakh, but one should remember an enormous amount of action took place in Arunachal Pradesh in the 1962 War.”

“This time too, there are ominous signs in Arunachal Pradesh because the Chinese strengths lie in the eastern sector,” warns Dr Kanti Bajpai, author of the fascinating new book India Versus China: Why They Are Not Friends.

The well respected scholar on security issues spoke to Rediff.com‘s Archana Masih in a 70 minute call from Singapore about why the Chinese moved into Ladakh and what irks China about India.

The first of a multi-part interview:

In your book India Versus China: Why They Are Not Friends, you have given a combination of four factors about why Chinese troops moved into Ladakh.
What do you think was the definitive trigger for the PLA incursions into Ladakh?

The book, in fact, does not deal with the Ladakh 2020 episode in great detail because we are too close to the events to know the real story.

I do suggest that there are three arguments for China’s moves in Ladakh.

1. Chinese domestic politics: Though Xi Jinping is widely regarded as the biggest leader in the Chinese Communist party, there are rivals and factions within the party who are unhappy with his campaign against corruption and his seemingly lifelong tenure.

His aggressiveness with India, Taiwan, Japan, the United States, Australia etc, comes from the desire to be seen as a strong leader in order to silence his rivals internally.

2. Series of Indian foreign policy moves: The proximity to America;

Playing an enhanced role in the South China Sea;

Speaking out prominently against the Belt and Road initiative which is very close to Xi’s heart;

India’s position on Kashmir and revocation of Article 370. Kashmir is a domestic matter, but it is a contested issue with Pakistan, and hence has foreign policy implications, especially since the Chinese have a slice of Kashmir ceded by Pakistan in 1963.

These geopolitical moves did not go down well and Beijing wanted to give India a rap on the knuckles.

China wanted to show India and the world that India was a paper tiger and could not do much if the Chinese military moved into Ladakh.

3. India’s increasing infrastructure extension: Especially, since the Manmohan Singh period, India has been ramping up roads and other infrastructure in the border areas quite significantly.

Although the Chinese started building infrastructure from the early 2000s, they don’t want India to do the same. The road from Leh to Daulat Beg Oldie up to the Karakoram Pass has made the Chinese nervous in Aksai Chin.

All three above factors are plausible and inter-linked, but I think the last explanation is probably closest to the truth.

Prior to Ladakh 2020, there have been a series of confrontations.

In 2013, there was a confrontation in the Depsang Plains.

In 2014, even when Xi was talking to Modi on a jhula in Ahmedabad, there was a confrontation in Chumar.

In 2015, there was a confrontation in Burtse which was downplayed by the media.

Confrontations took place for three consecutive years till Dokalam in 2017.

The Chinese found the Dokalam standoff a bit hard to swallow because India and China were eyeball to eyeball for over 73 days.

All these confrontations were basically about infrastructure, either China pushing up or Indians taking umbrage over Chinese infrastructure moves.

The Chinese perception was that India was extending its connectivity and infrastructure.

In my view, Ladakh 2020 is a result of India’s infrastructure extensions which India is legitimately entitled to do. This has irked the Chinese the most.

You also write that with Ladakh, we are seeing a repeat of the 1949-1962 period — a gradual ratcheting of the border quarrel and increasing military tensions.
You also say that there was constant poking and prodding for eight years before the 1962 War.
Do you feel we are hurtling towards a 1962-like denouement — a short duration war?

We could be — and that is the worry.

We are focused on Ladakh, but one should remember in 1962, an enormous amount of action took place in Arunachal Pradesh, or what was then known as the North East Frontier Agency.

The Chinese attacked in the East where India was strongest to make it obvious that they could hurt us in our area of strength.

The biggest battles were fought there, but India’s defences crumbled and we suffered heavy losses.

India did relatively well in the Ladakh sector.

This time too there are ominous signs in Arunachal Pradesh because the Chinese strengths lie in the eastern sector.

I say this for the following reasons: 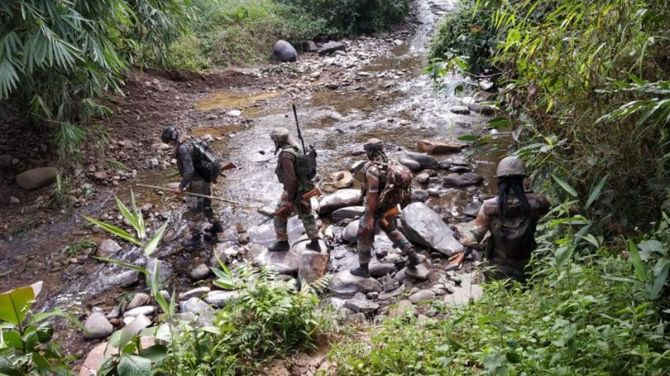 Firstly, three major Chinese military bases and command centres are near India’s eastern border — two in Lhasa and one further east in Chengdu.

Whereas the Chinese only have one major command centre near Ladakh which is Hotan, near Xinjiang.

Secondly, since the 1980s the Chinese have insisted that the eastern sector or Arunachal Pradesh is more important than Aksai Chin which lies in the West.

The Chinese lay claim to the entire Arunachal Pradesh.

Thirdly, as their economy has ramped up, China has developed a greater interest in the economic resources of Arunachal Pradesh — the agricultural land, natural resource, water resources arising from the Brahmaputra river — while Aksai Chin is a desert.

Fourthly, China has a symbolic interest in Arunachal Pradesh focused on the Tawang monastery where the sixth Dalai Lama was born. It is the second most important centre of Tibetan Buddhism after the Potala Palace in Lhasa.

The Chinese have made it very clear since 1985 that any settlement of the border would include Tawang because of its implications on the Dalai Lama’s successor.

We hope the present Dalai Lama has a long life, but after him, the Tawang monastery might be important in the sanctification of the next Dalai Lama.

This is why India has reasons to worry. China can cause a problem not just in Ladakh, but also in the east.

Several retired generals assert that the PLA erred in assuming that the Indian Army would be a pushover and have reoriented their military strategy since they entered Ladakh.
They have moved further from grabbing territory and want to keep the Line of Actual Control as ‘live’ as the LoC, thereby compelling the Indian Army to post far more soldiers along the LAC?
What do you think is the current Chinese objective in Ladakh?

Of course, the numbers of troops on both sides are enormous. They are about 50,000-60,000 soldiers facing each other in that sector — just as a historical curiosity, that’s about the total number of troops that both sides had in the 1962 War in all sectors.

The Chinese definitely want to make the point that they don’t like Indian infrastructure development in the Western sector. It’s not just roads, but the reactivation of landing strips, especially in the Depsang area.

India has developed capability to land large planes at very high altitudes, which has got the Chinese worried.

Part of the reason is the Chinese highway that connects Xinjiang to Tibet. In the 1950s this was the military lifeline because the Chinese command centres were located in Xinjiang.

As China attempted to assert control over Tibet, they had the comfort that they could move troops from Xinjiang into Tibet.

Since then, China has developed a several highways into Tibet, but the Xinjang-Tibet highway continues to be important. The Chinese don’t want any vulnerabilities there.

India’s infrastructure and military capabilities have improved in the sector.

The Chinese are especially concerned about the road to the Karakoram pass which lies very close to the [Chinese] front areas.

The Karakoram Highway connects Kashgar in China to Pakistan and the Chinese are also sensitive about that linkage.

They moved into areas near Galwan to be able to look down on that road that moves up towards the Karakoram pass so that they could position artillery and troops on the heights.

There’s also a psychological signalling about India’s relationship with the United States. China wants to convey that it is not intimidated and wants to warn India that it can take military action in that [western] sector.

The PLA has moved and reinforced its forces. Earlier they would come for patrolling and withdraw when it got too cold, the Indians would do likewise. But now, they seem to be suggesting that they are there to stay with significant bases, infrastructure and troop reinforcement in the rear.

They are not leaving in a hurry. This is why, despite 11 rounds of military talks, they have not withdrawn except to some extent in around Pangong Tso. It is a different ballgame there.

You spoke about the advantage of heights — do you think it was a mistake to withdraw from the Kailash Heights in Ladakh?

That response would be best given by military generals, but tactically heights provide the ability to do look down upon your opponent, both for surveillance and reconnaissance, and also to rain down fire.

To the extent India has given up a bit of an asset. Of course, I suppose the Chinese would say that they have pulled out of certain areas of Pangong Tso in return. The question now is what does India have as a bargaining tool for the future to get the PLA to pull out of other areas.

At the moment, I don’t see any.

The important aspects before both the armies is the long term cost of deployment and running the supply lines to the men in view of the weather and terrain.

Hence there may be a good reason to go back to the status quo ante, but at the moment, neither side seems to be prepared to do that.