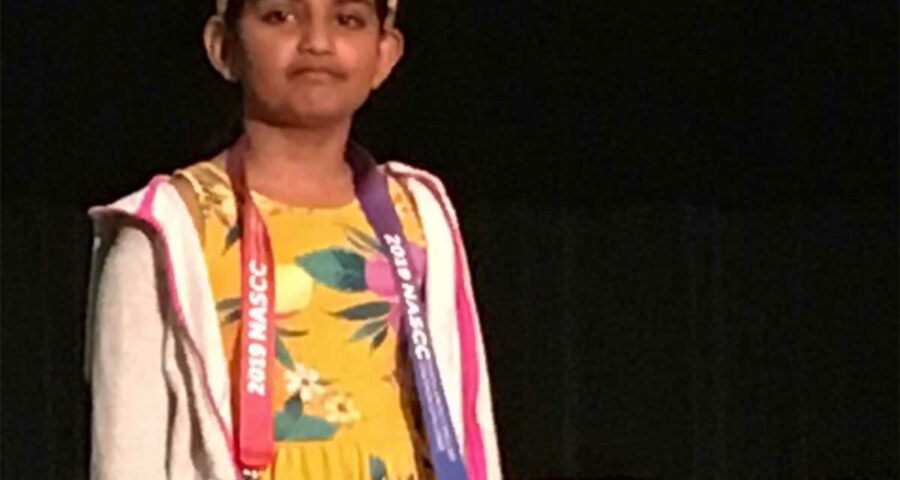 ‘When I was around 6 years old, my brother was competing in the Spelling Bee, so I wanted to do it too.’

Tarini Nandakumar is a 10-year-old fifth grader from Austin, Texas. She is shy to talk to, but bold and confident in rattling off spellings of the almost 40,000 words that she has learnt for the Scripps Howard National Spelling Bee competition.

Tarini is one of the youngest Spellers in the spelling contest.

Tarini’s parents are software engineers, originally from Tamil Nadu, and are confident of her doing well in the semifinals to be held on Sunday, June 27.

“In spellings, there are some languages that I am good at. Such as words in French, Latin and Greek,” Tarini tells Rediff.com US Contributor Abhijit Masih, when asked “In which category do you think you are strongest?”

10 Questions in a 10 minute interview with the 10 Year Old Spelling Champ:

1. When did you first start watching and following the Spelling Bee contest?

When I was around 6 years old, my brother was competing in the Spelling Bee, so I wanted to do it too.

I would accompany my brother to the Spelling Bee. (Pranav Nandakumar came 19th in the 2018 National Spelling Bee competition.) 2. Is this your first time at the Spelling Bee competition?

I started from 2019. That year I participated along with my elder brother. I came 4th in the Austin Regional Bee that year.

This year I have made it to the National Semi-Finals.

3. From when did you start preparing for this year’s Spelling Bee?

Since last year. Maybe, it has been a year-and-a-half since I started learning the spellings.

4. Which was the toughest word that you had to answer this year?

It was probably BANLIEUE. (She goes on to spell it for me). It was a word that I had to spell in the regional round.

5. In the Spelling Bee, which category do you think you are strongest?

In spellings, there are some languages that I am good at. Such as words in French, Latin and Greek.

Can you spell one such language word?

PASSACAILLE (She rattles off the spelling in one breath)

6.Who helps you in your preparation?

My mom and my brother. 7. Other than learning spellings, what are your other interests and hobbies?

8. Which is your favorite movie?

Frozen. I love the film and am a big fan of Elsa and Anna.

9. What do you want to become when you grow up?

I am not sure yet.

10. What do you do when you are not studying or learning spellings?

I like to play with my brother and my dog Simba. As in the movie Lion King. 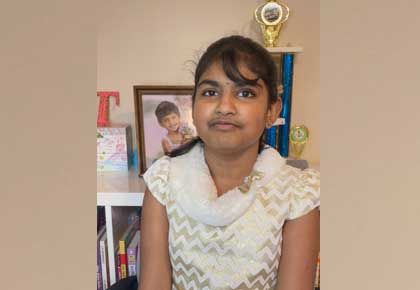