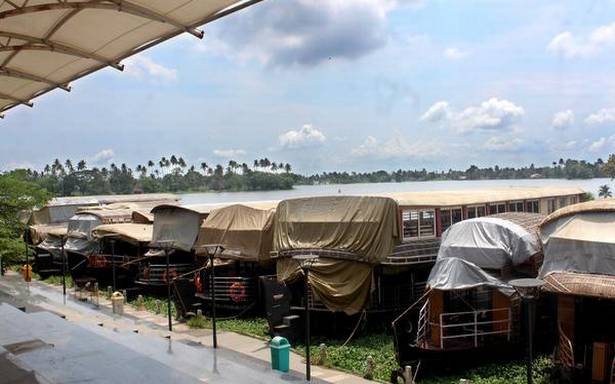 The houseboat operations were among the first to come to a grinding halt after the pandemic started to sweep the world in early 2020. The vessels remained anchored for more than six months before resuming operations in October 2020.

The Punnamada Lake looks still and serene. There is no jostling of vessels or chugging sound of engines. In the interior, the palm-fringed backwaters wear a deserted look amidst an uninspiring quietude. This calmness comes at a price.

The Statewide lockdown to tackle the spread of the second wave of the COVID-19 pandemic has put the houseboat sector in the doldrums. The backwater tourism sector as a whole has faced several major setbacks in recent times in the form of Cyclone Ockhi, the Nipah outbreak, and back-to-back floods. The houseboat operations were among the first to come to a grinding halt after the pandemic started to sweep the world in early 2020. The vessels remained anchored for more than six months before resuming operations in October 2020.

“It is back to square one”, says Varghese K.T., a houseboat owner from Alappuzha. “After all the troubles, the sector was slowly on the path to revival. But the second wave and the subsequent lockdown have dashed all hopes. I have been doing business after raising a bank loan. The repayment has become irregular since the first lockdown. The second lockdown has exacerbated the situation,” Mr. Varghese says.

Thousands of people allied with the sector including houseboat owners and employees are staring at an uncertain future. The crisis caused by the pandemic has pushed several of them into a debt trap.

Vinod V., president, All Kerala Houseboat Owners Association says it will take another two years for the sector to achieve normality. The stakeholders have sought the intervention of the government to tideover the crisis.

“Although the government has announced a financial package for the tourism industry in August 2020, not many in the houseboat sector received its benefits. Ninety percent of applications for aid under the subsidized loan assistance scheme have been rejected by banks. While a few hundred owners have become eligible for the one-time maintenance grant, others have been left out of it too. A large number of operators have already wound up the business and migrated to new pastures. Those resumed operations after spending huge amounts for the maintenance of boats that remained anchored for several months last year have found themselves in the lurch with the second lockdown,” Mr. Vinod says.

Jobin J. Akkarakalam of the Kerala Houseboat Owners Federation urged the government to at least waive the license and pollution control fees during the lockdown period.